Every project concerning the public space cannot ignore the present time. We are experiencing a difficult age, marked by the ongoing pandemic, but for this reason it is also a time of design challenges.
While the world of architecture questions itself with obsession on hygiene and physical distancing, it seems significant reflect on the sense of unhappiness widespread in people, caused precisely by social distancing and the consequent emotional isolation.
If happiness is often simply talking to a stranger, it must be recognized that the pandemic has brutally frozen any casual social relationship. Far from being accessory in human life, these relationships make us feel part of a larger community than our own family and work context. They are truly the simplest and most immediate vector of happiness. In an increasingly shortage of public places, even a bus stop should become an opportunity for people to meet. At bus stops, however, we normally only find linear seats that generate spatial configurations in which people sit side by side, staring at the road, when not immersed in their smartphone. 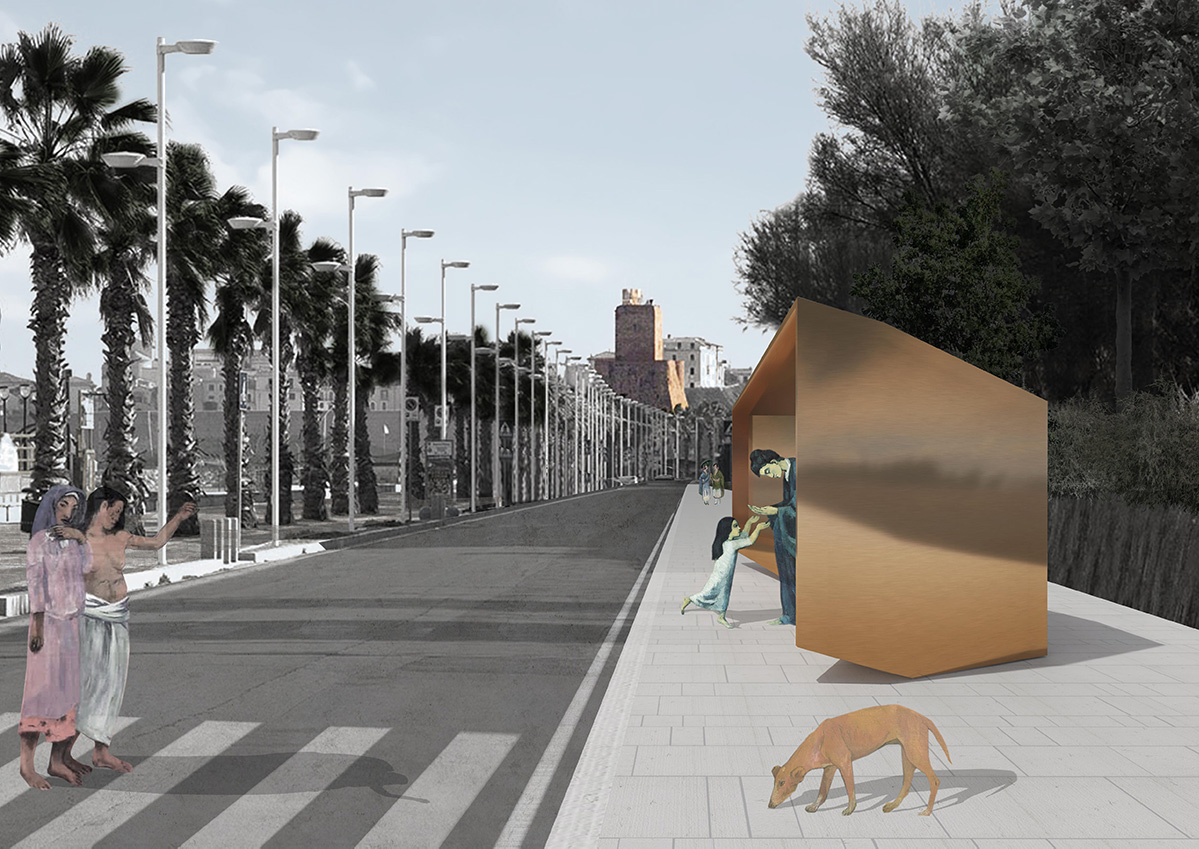 Architectural concept
The genesis of the project is very simple: folding the waiting seat until it becomes a concave bench, capable of reproducing a face-to-face relationship between people, a prerequisite for a convivial space. Curving the seating space brings to a virtual subtraction of a large part of the volume of the bus stop, which from a bulky parallelepiped volume, becomes a slipped object, capable of not blocking the pedestrian flows that lap it.

Three further volumetric subtractions are then made:
1_ In the lower part, the object footprint is reduced by tapering the two wings of the seat.
This operation allows the support base to be concentrated in the barycentric portion only, making installation flexible and fast in any peristradal context.
2_ In the upper part, a diagonal cut create a pitch, optimal for conveying rainwater.
3_ In the the backdrop, a rectangular opening is cut, allowing to frame the landscape. The width of the opening, 41 cm, is taken from the narrowest alley in Italy, present in the ancient village of Termoli, the so-called “A Rejecelle”.

Materiality
To emphasize the iconic character of the shelter, breaking away from the typical prefabricated shelters identical to every corner of the planet, it was decided to use a single golden material.
Golden, to reverberate the shades of the beaches of Termoli and the ancient walls of the Borgo Antico.
Golden, to hint the electricity selfproduced by the photovoltaic roof.
Golden, as a precious thing, in an attempt to overturn the scarce appeal that local public transport still suffers. 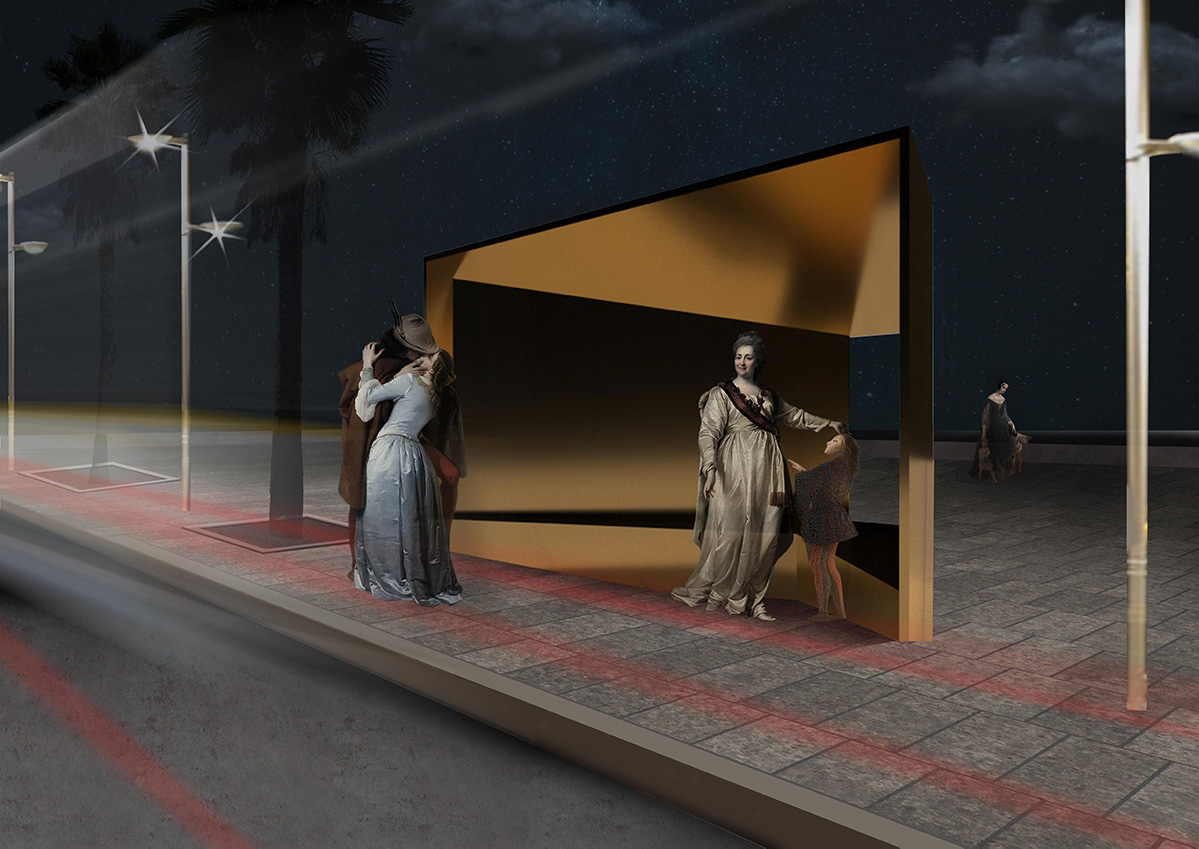 Technically, the material that characterizes the bus stop skin, is a composite panel based on metal sheet, 0.3 mm thick, in copper, zinc and aluminum alloy, to which a polyethylene core is applied under high pressure. The sheets are protected by transparent PVDF paint, capable of inhibiting the natural oxidation of the metal when exposed to atmospheric agents and making it extremely easy to clean after graffiti vandalization. The composite panel is mounted on a galvanized steel profiles frame and finished with blacksmith works, to produce a monolithic looking artifact. The bus stop is entirely prefabricated and then transported and installed with a common two-axle truck equipped with a crane. It can be considered more a design object than an architecture. 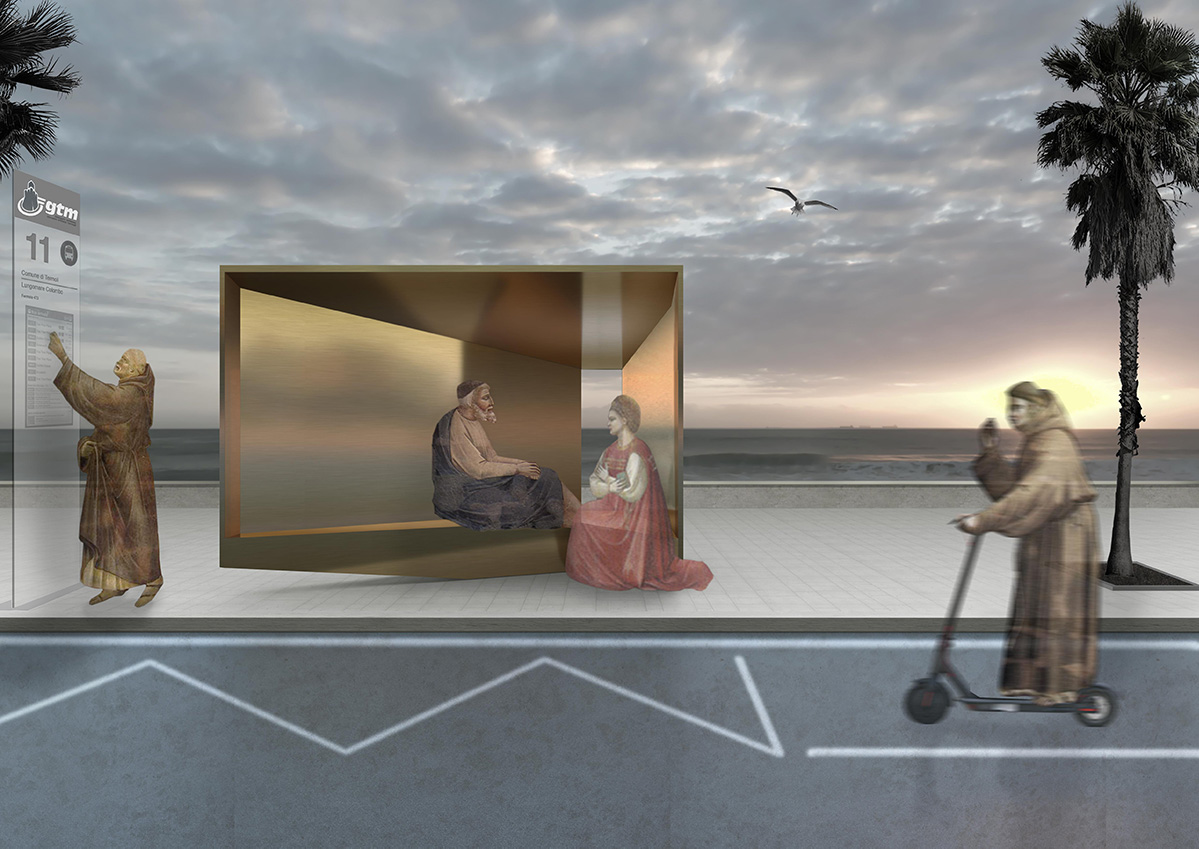 Technology
Behind the sculptural character of the shelter, there is a technological soul.
The bus stop is indeed able to autonomously produce electricity, through polycrystalline photovoltaic panels placed on the roof. The energy produced is sufficient for LED lighting, a USB charging microstation, an electric socket, a wi-fi router and the information totem equipped with a touch screen to be installed a few steps from the shelter itself. Hidden under the seat take place a 5 kWh battery. Connection to the grid start only if battery come close to 10% of its charge. In this way, night lighting and powering of the information totem screen are always guaranteed.. 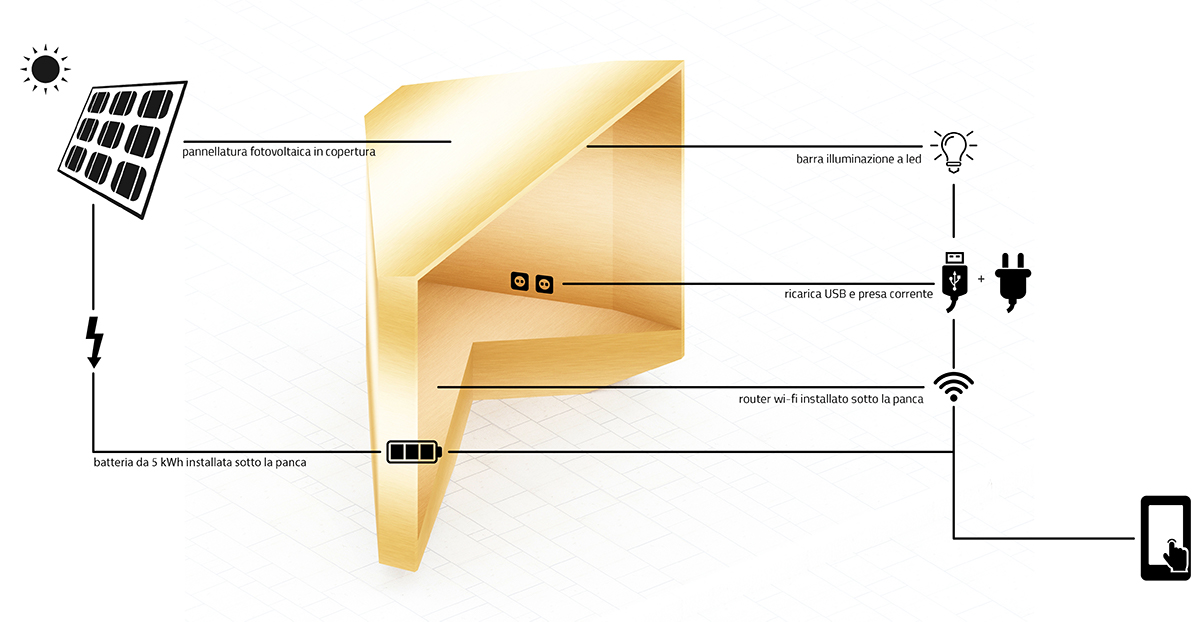 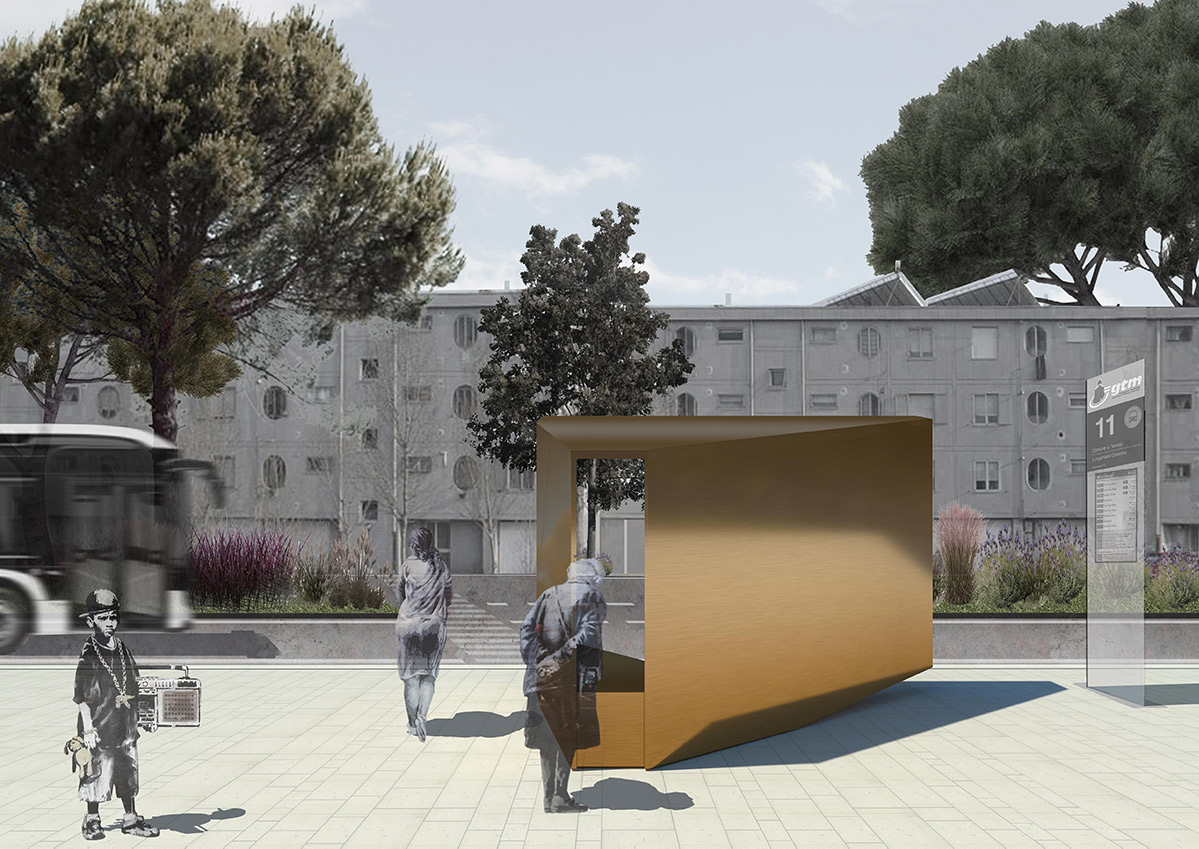 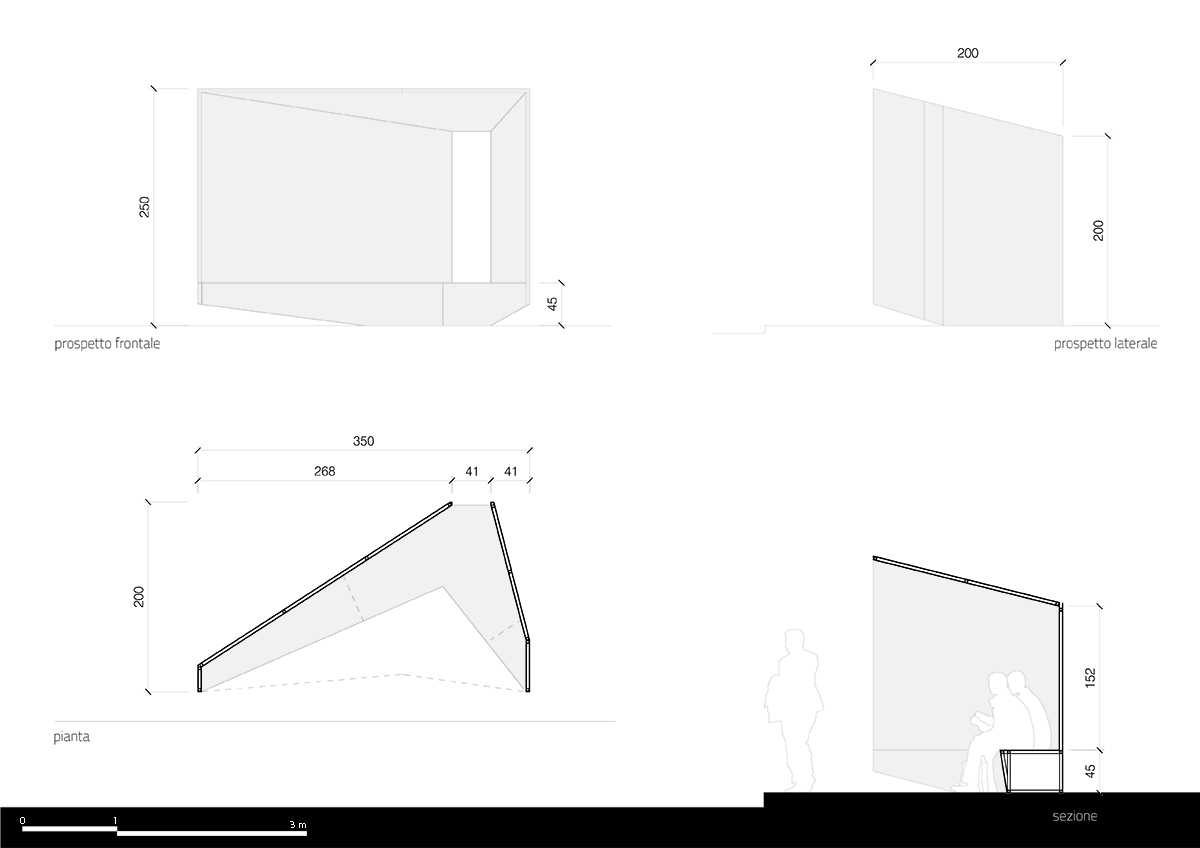 Thanks Museum MACTE and Premio Termoli for the organization of the competition and the exhibition.