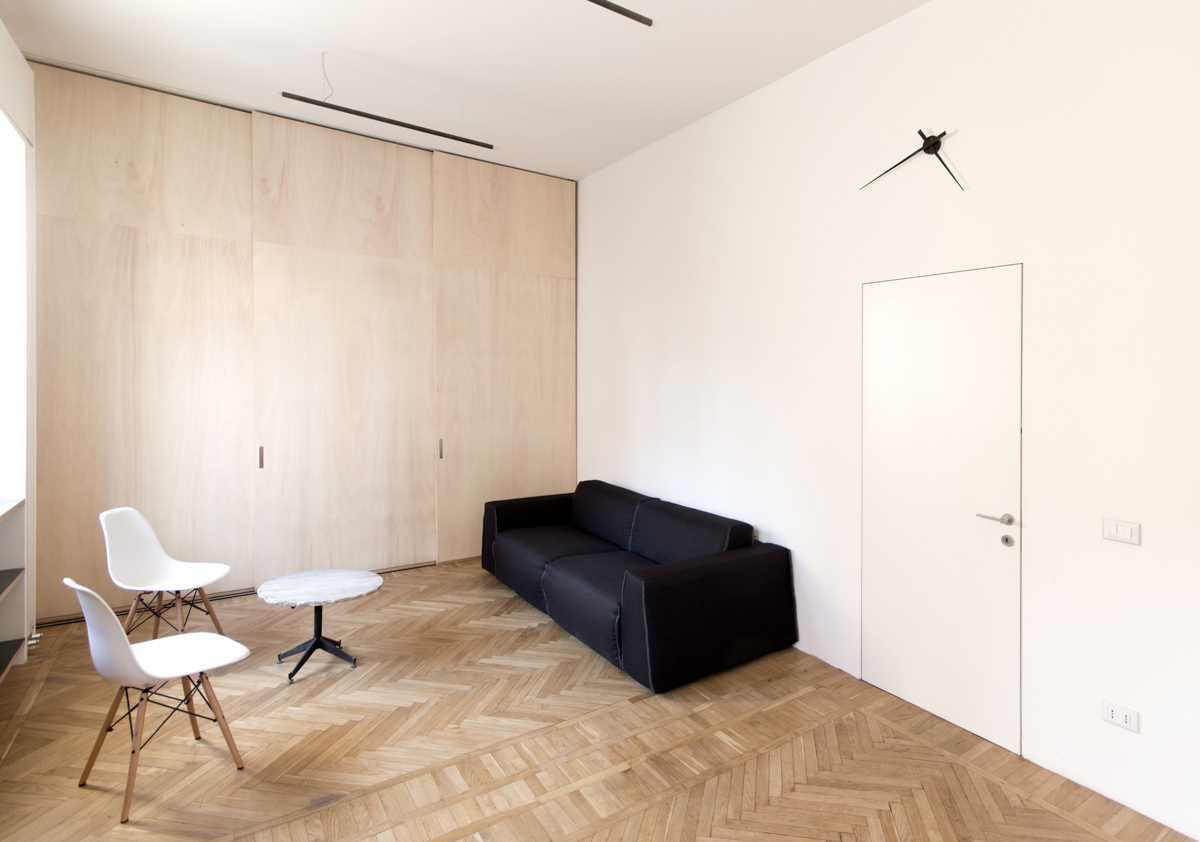 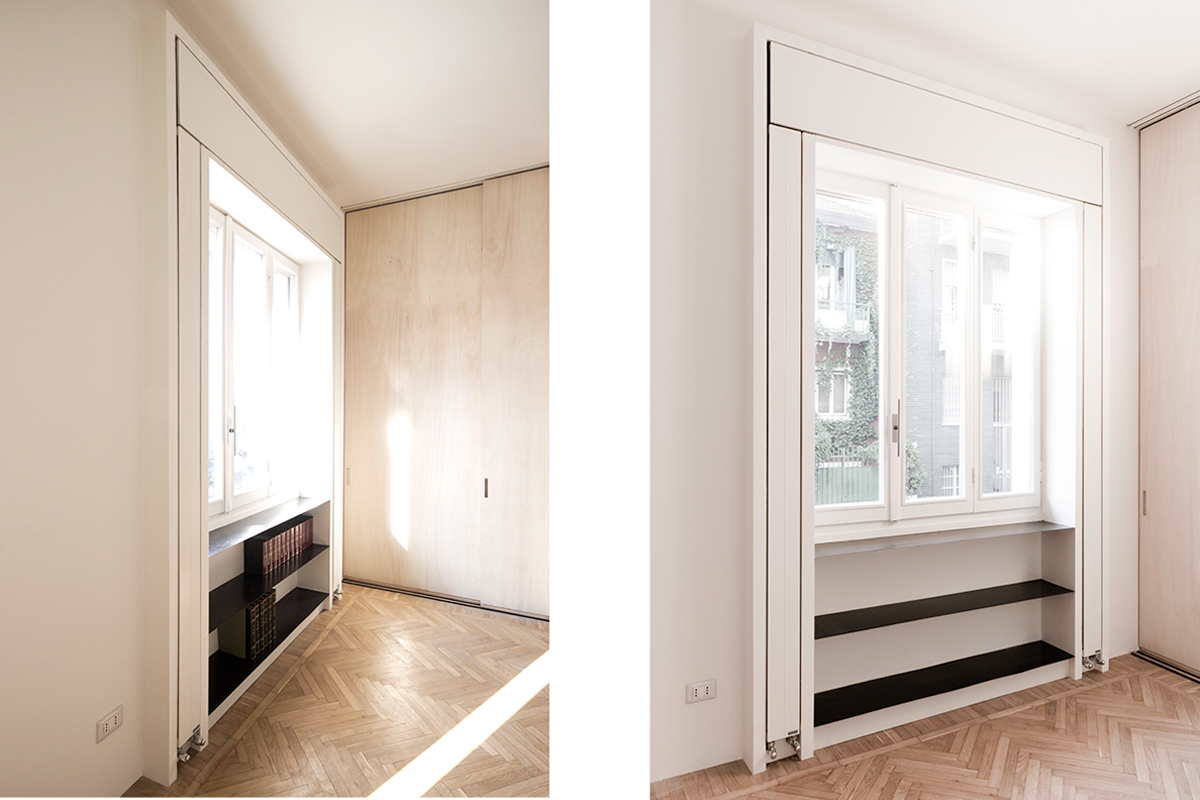 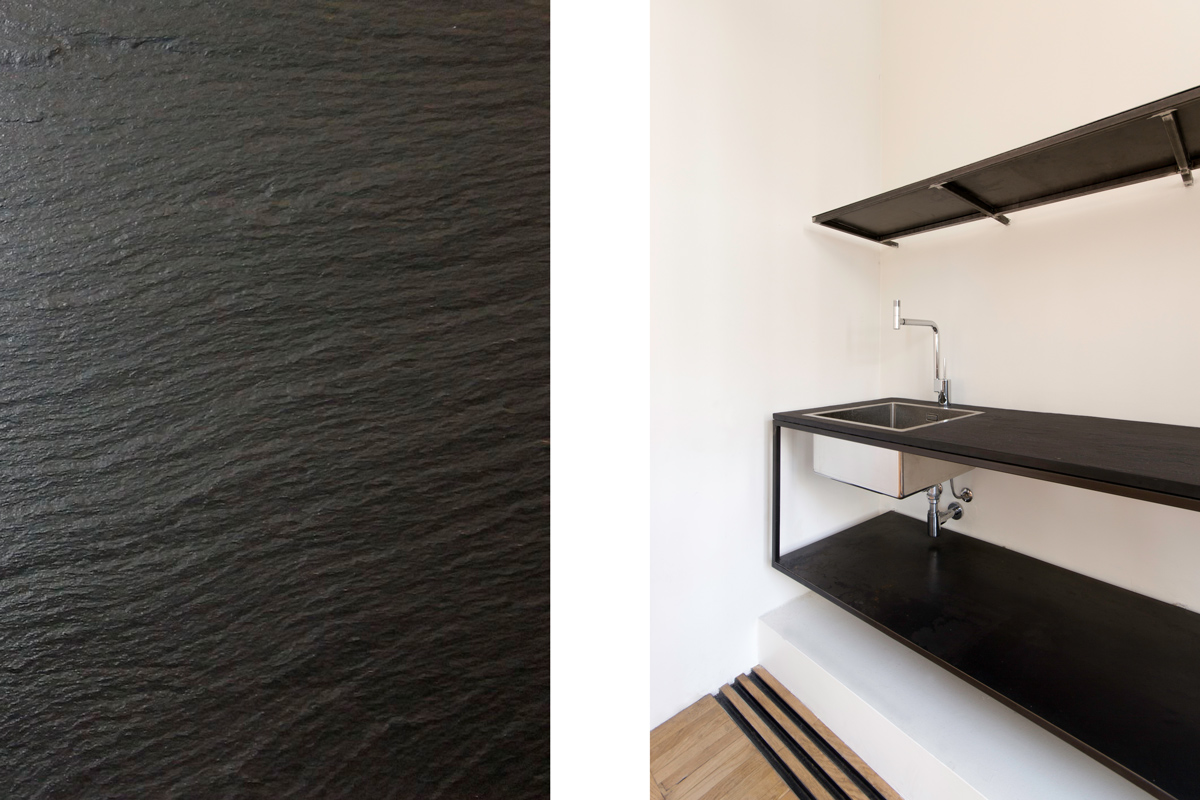 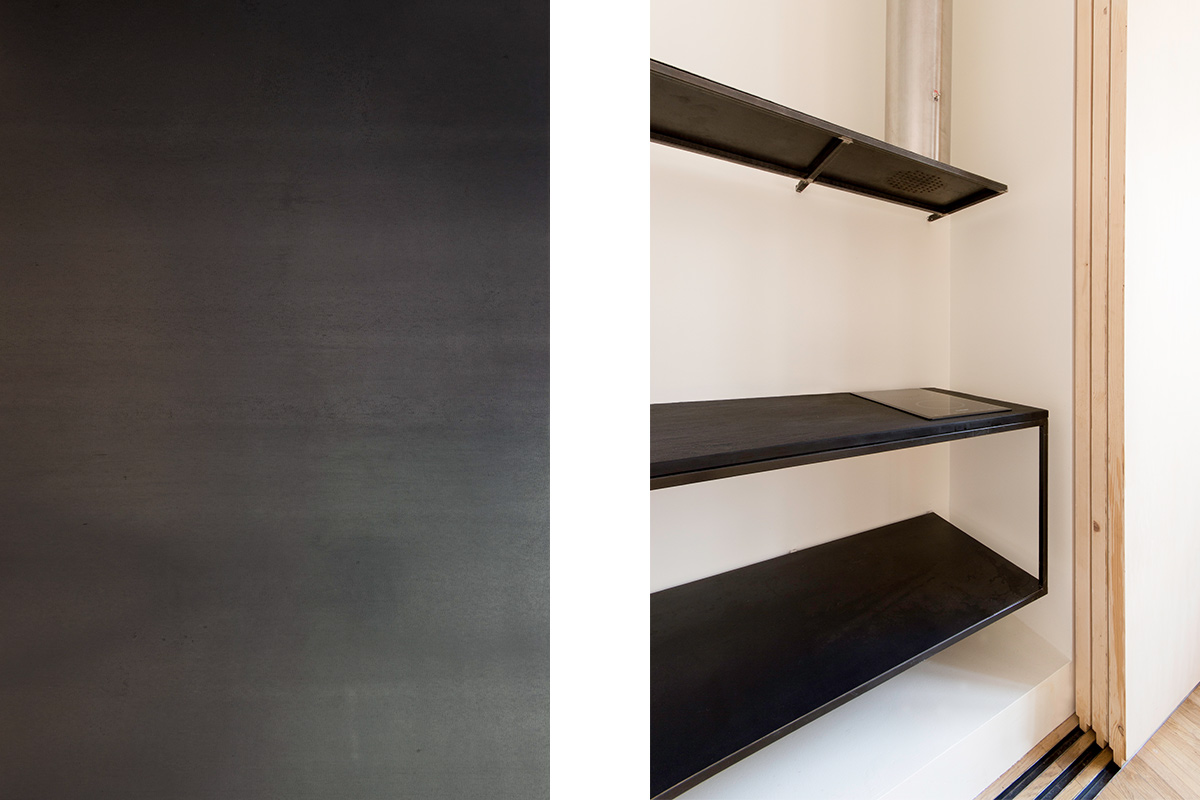 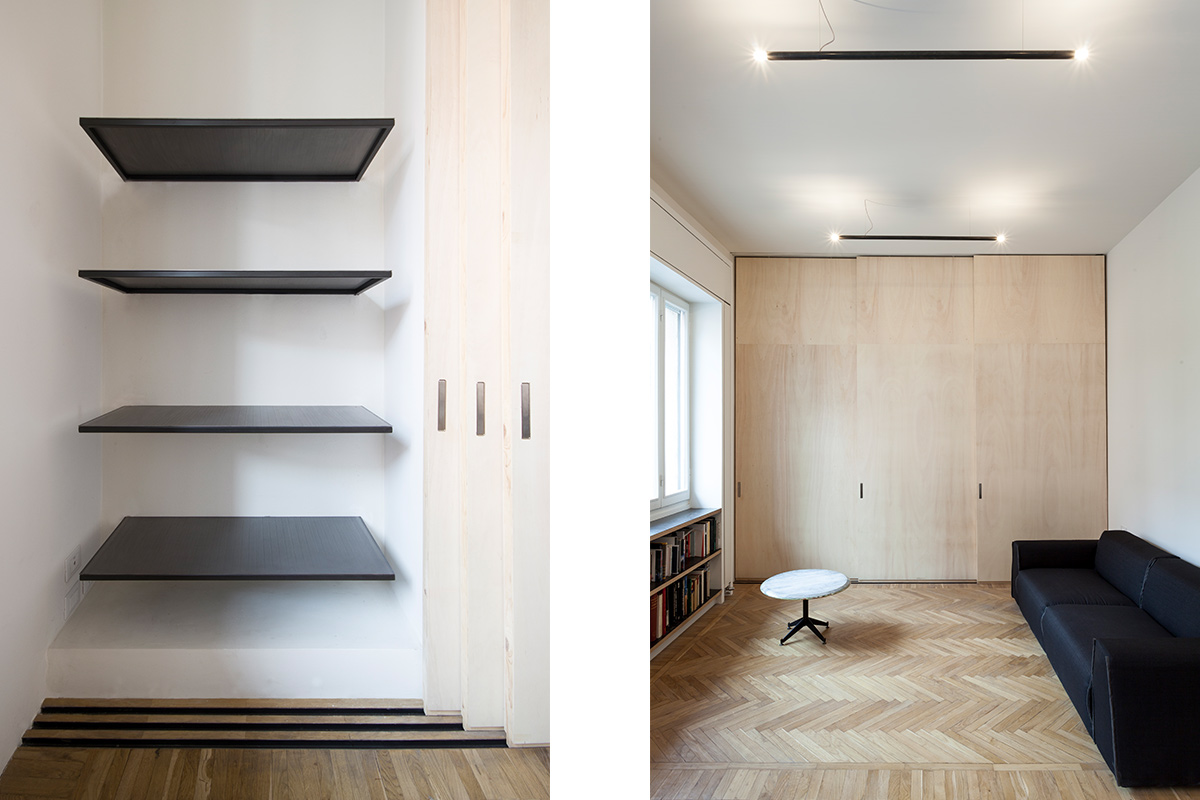 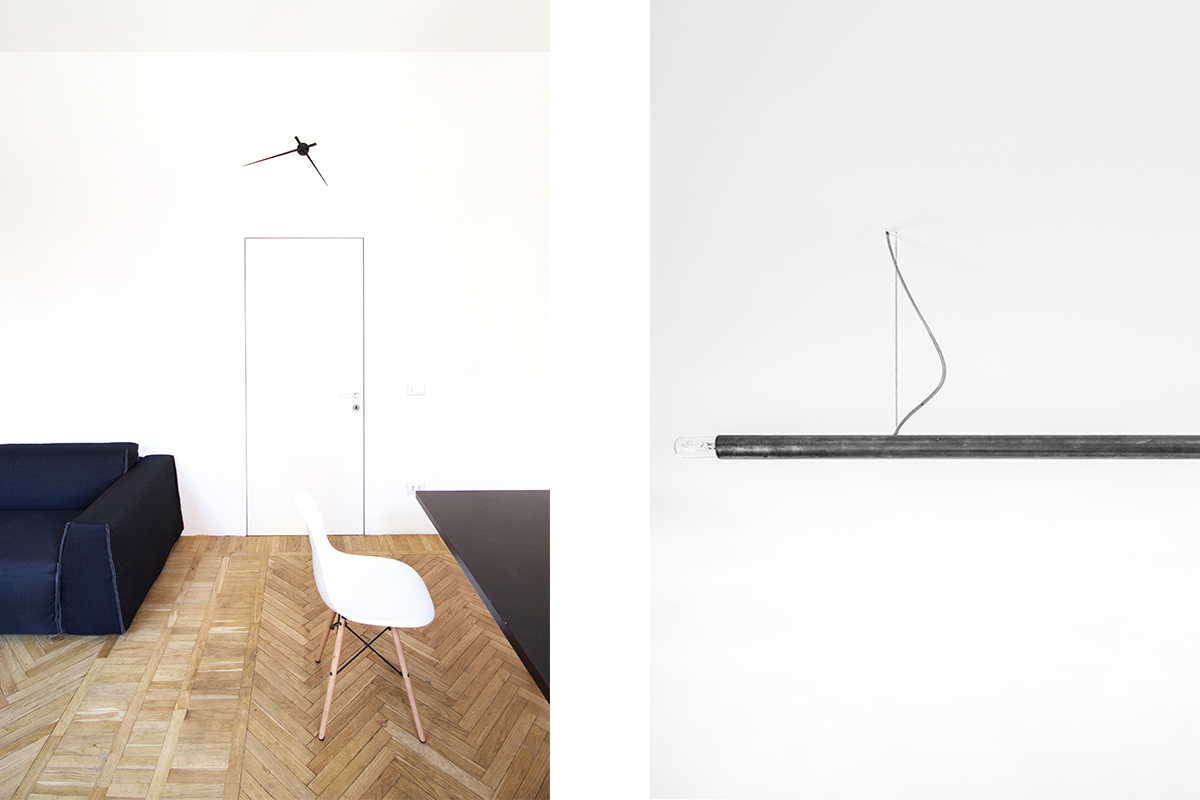 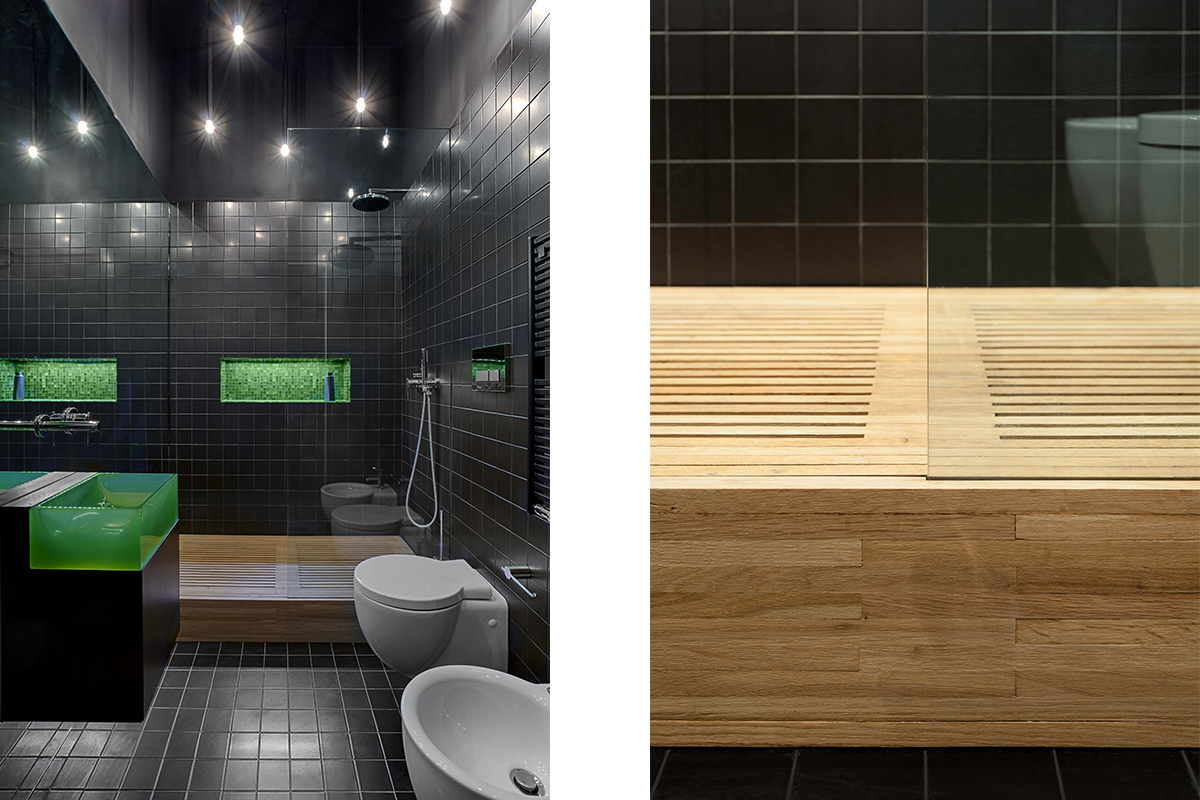 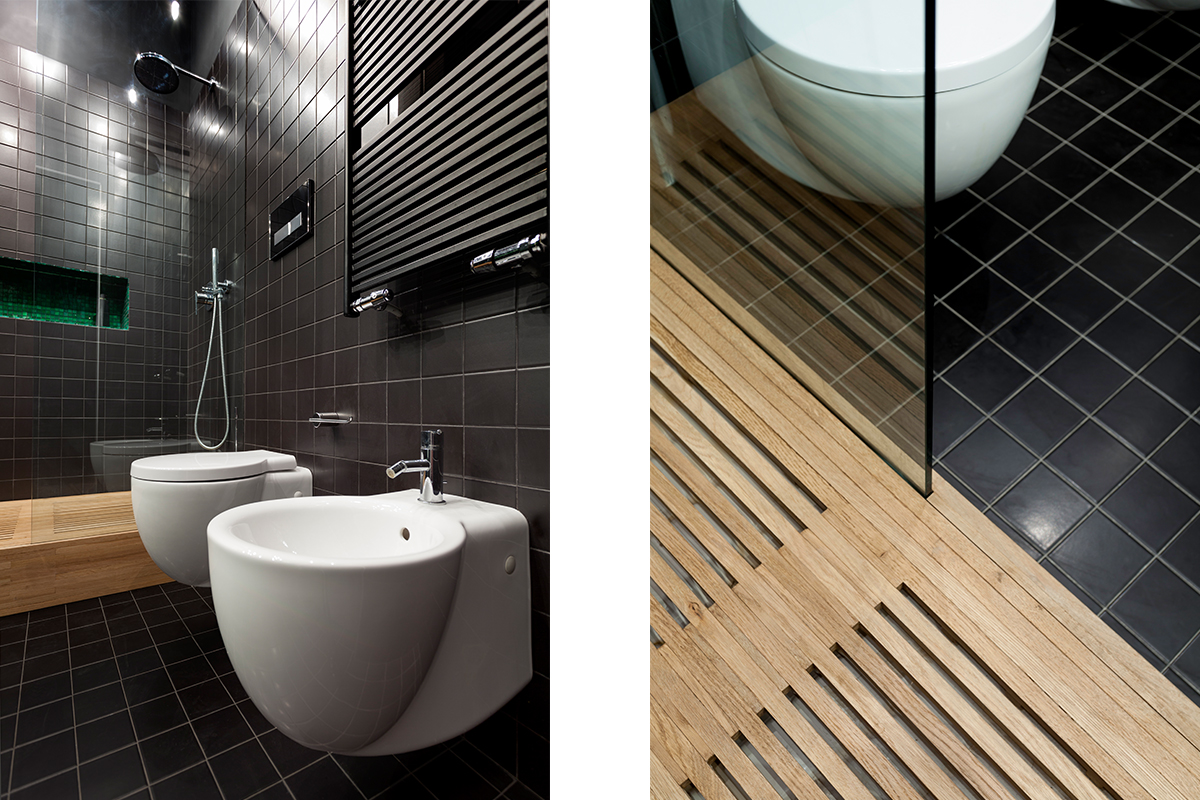 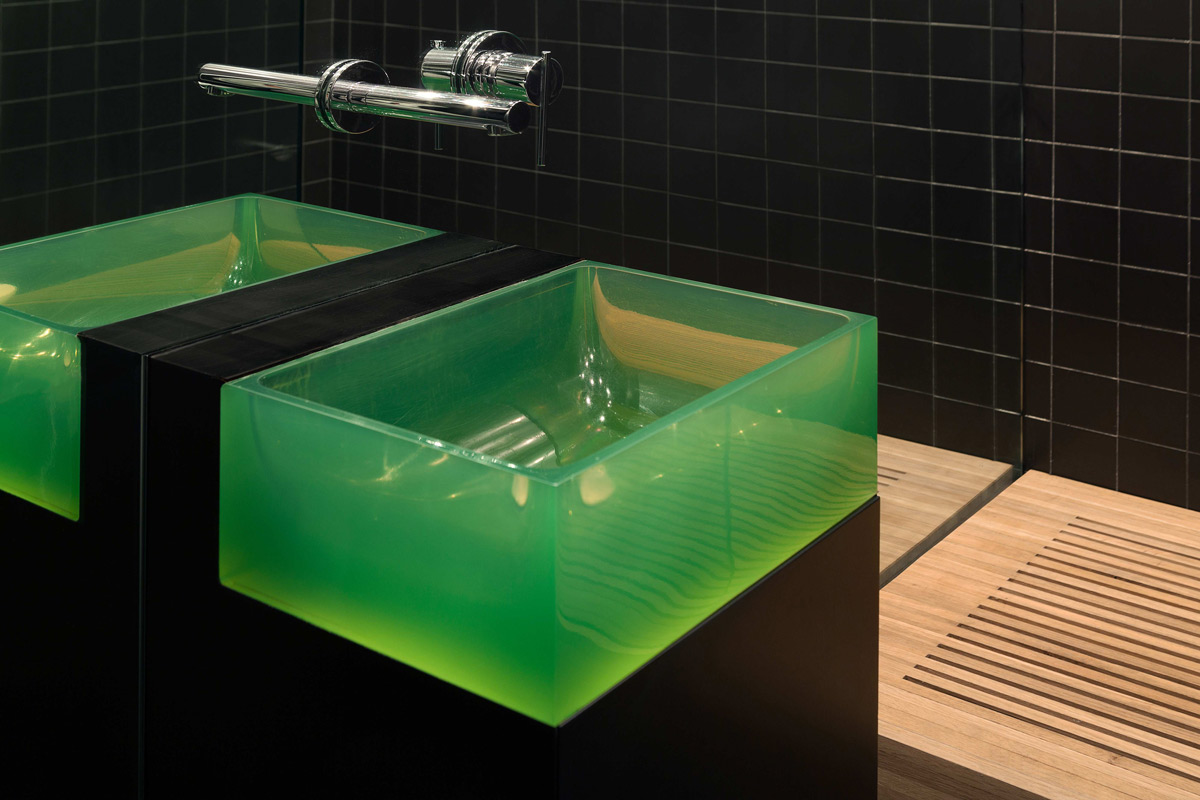 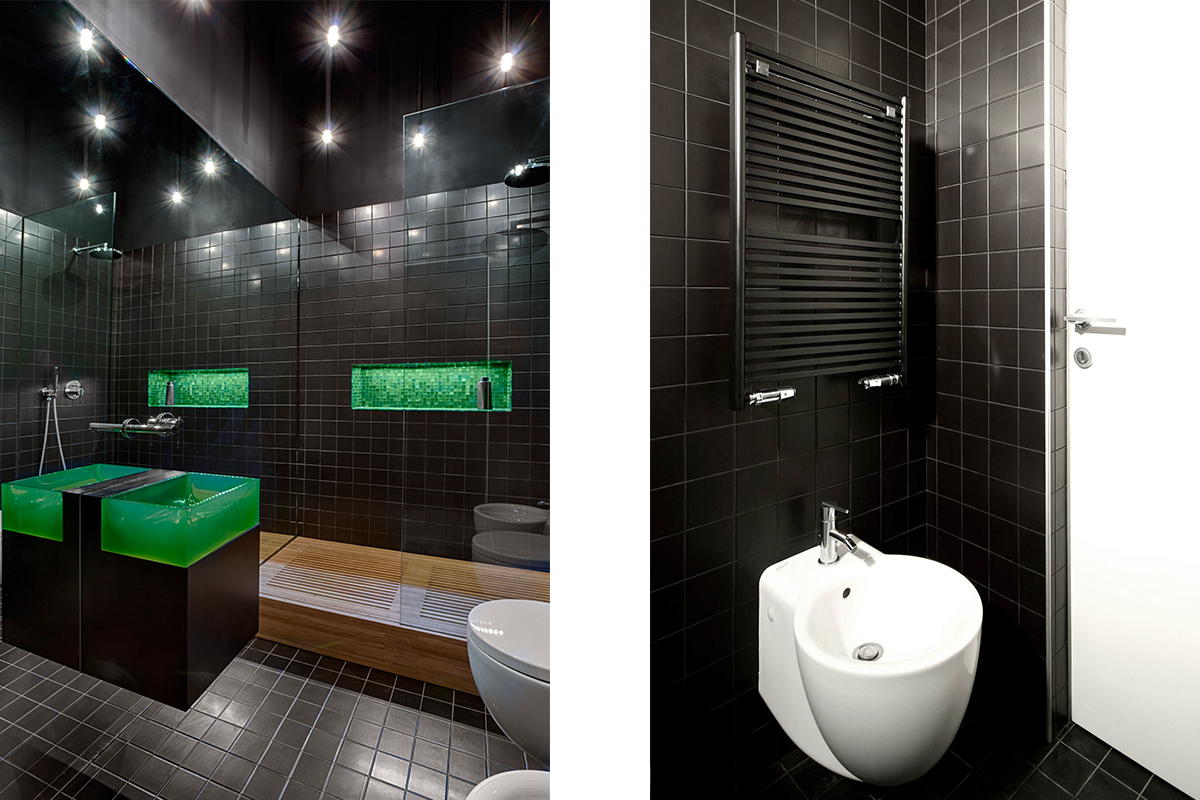 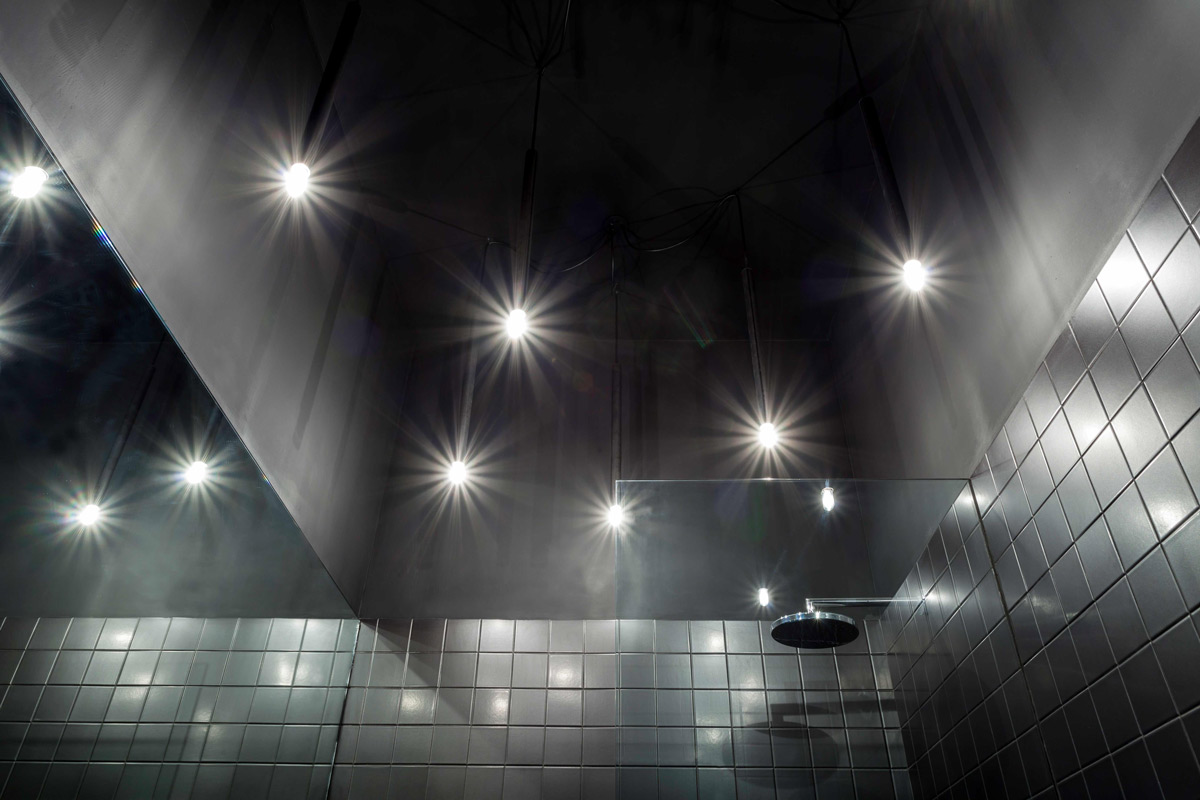 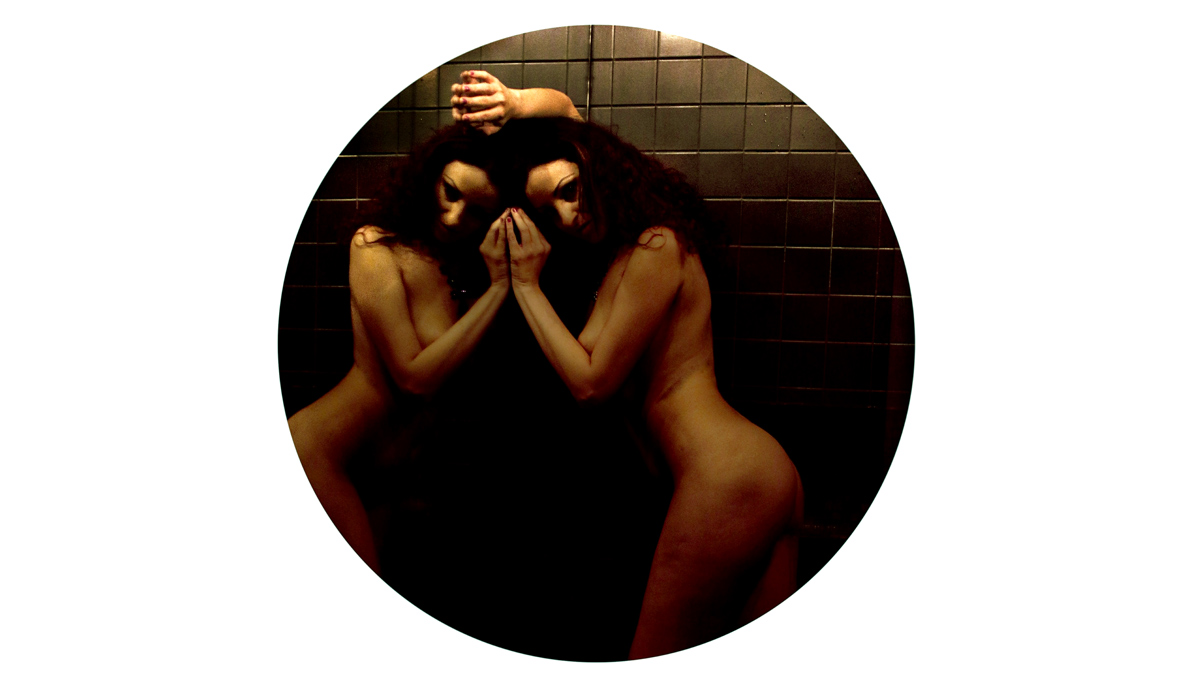 This project concern the transformation of an abandoned office into a small apartment dedicated to temporary hospitality.
Some pre-existing architectural elements such as the old herringbone parquet, the large windows, and last but not least the remarkable interior height, characterized the space for a quiet bourgeois beauty that claimed to be preserved. However, the small size of the two rooms created a spatial disproportion almost suffocating.
The project start from the creation of a single generous rectangular open space by demolishing the wall between the two rooms.

Openspace
The openspace is designed to be as free as possible from furniture.
For these reason, along the short sides of it, two built-in walls were designed to solve all the necessities regarding storage, washing, cooking, etc.
These two opposing compartments are enclosed by wooden mobile walls up to 3.5 meters high. Their sliding movement is ensured by a suspension system made up of oversized galvanized steel tracks.
Behind these large sliding doors, the various functions have been organized through fixed furniture made up of steel frames anchored to the wall.
The kitchen features a slate counter with embedded induction cooktop.
The hood is tailor-made from a stainless steel tube that connects the upper shelf to the ceiling. The hood motor is particularly powerful but remotely installed to maximize hood efficient without losing any acoustic comfort.

The space is dominated by the two pre-existing windows. Generous in dimensions but needing a complete rethinking both from technological then aesthetic point of view.
The technical renovation seen the replacement of the simple glass with double glazing sheet, while the aesthetic tuning was much more radical.
The windows, in fact, were surmounted by a enormous -and ugly- roller shutter box.
We chose to turn them into something completely different, taking inspiration from the windows of the historic palace of Milan, where a sort of wooden portal always framed the openings.
In this case, however, instead of the decorated shutters, were installed custom built heaters, while in the subframe were placed two shelves made of natural steel plates.
The old handles were replaced with two oversized steel prototypes manufactured by Hypnos on purpose.

Bathroom
The commonly used solution to design a blind bath is to finish its walls in a light shade.
Here we have done the opposite. By emphasizing the contrast with the rest of the apartment, the bathroom environment becomes a kind of light installation and reflexes on a black background.
Three walls were tiled with ceramic tiles 10x10cm black mat, while the upper part of the wall – as the counteceiling- were painted of the same color.
The fourth wall was entirely covered with a mirror.
Only a green resin suspended washbasin interrupts the mirror surface.
The light “rains” from above through steel tubes (designed and built specifically for this project) such implementing a strong dematerialization of the perimeter walls of the bathroom.
The walls fades and the space is perceived as a costellation of light spots and reflections bouncing from mirror surfaces to stainless steel taps.
The shower wood tray differs from the rest of the bathroom, bringing a bit of matter and naval echoes. 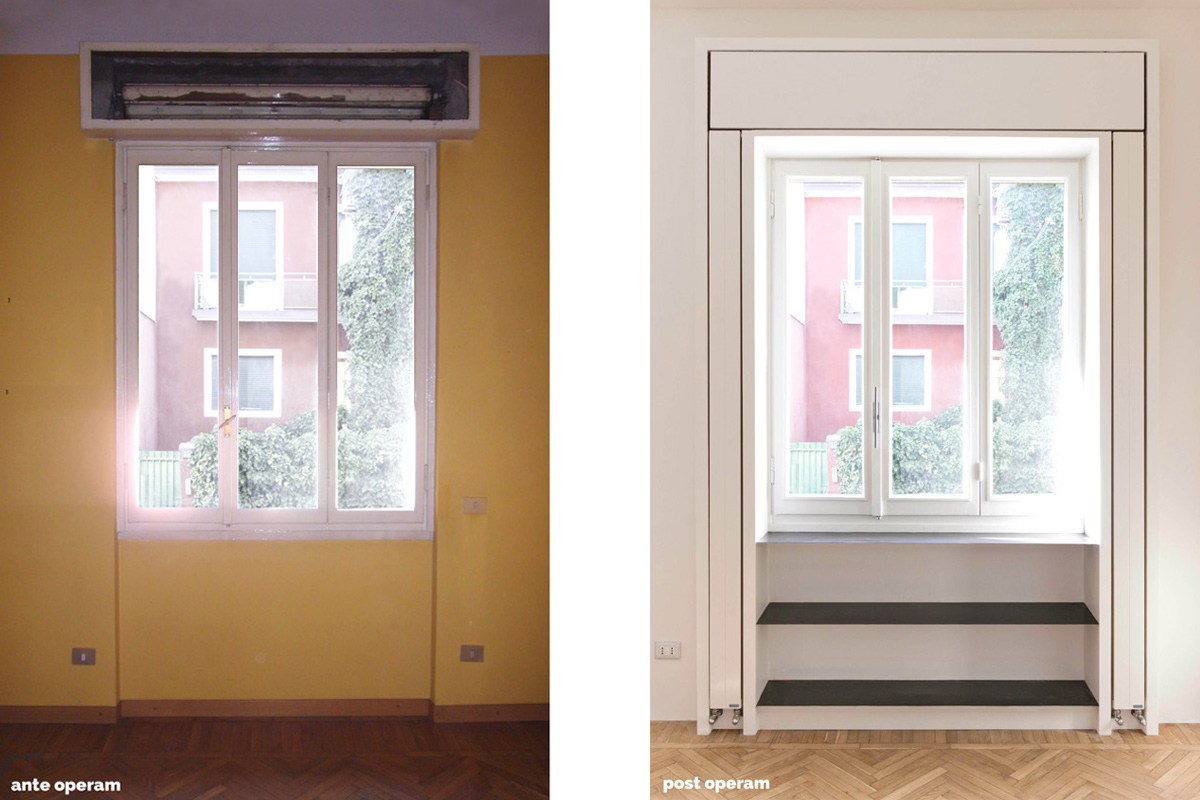 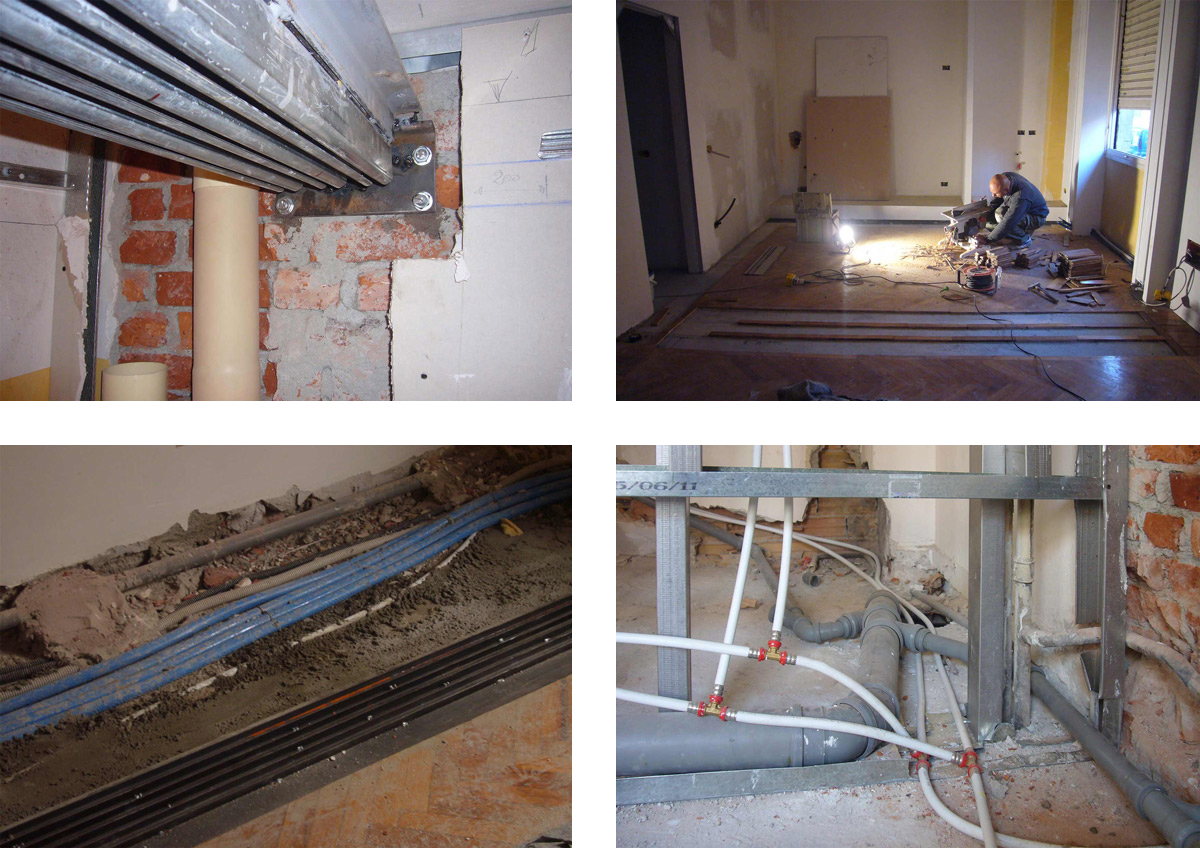