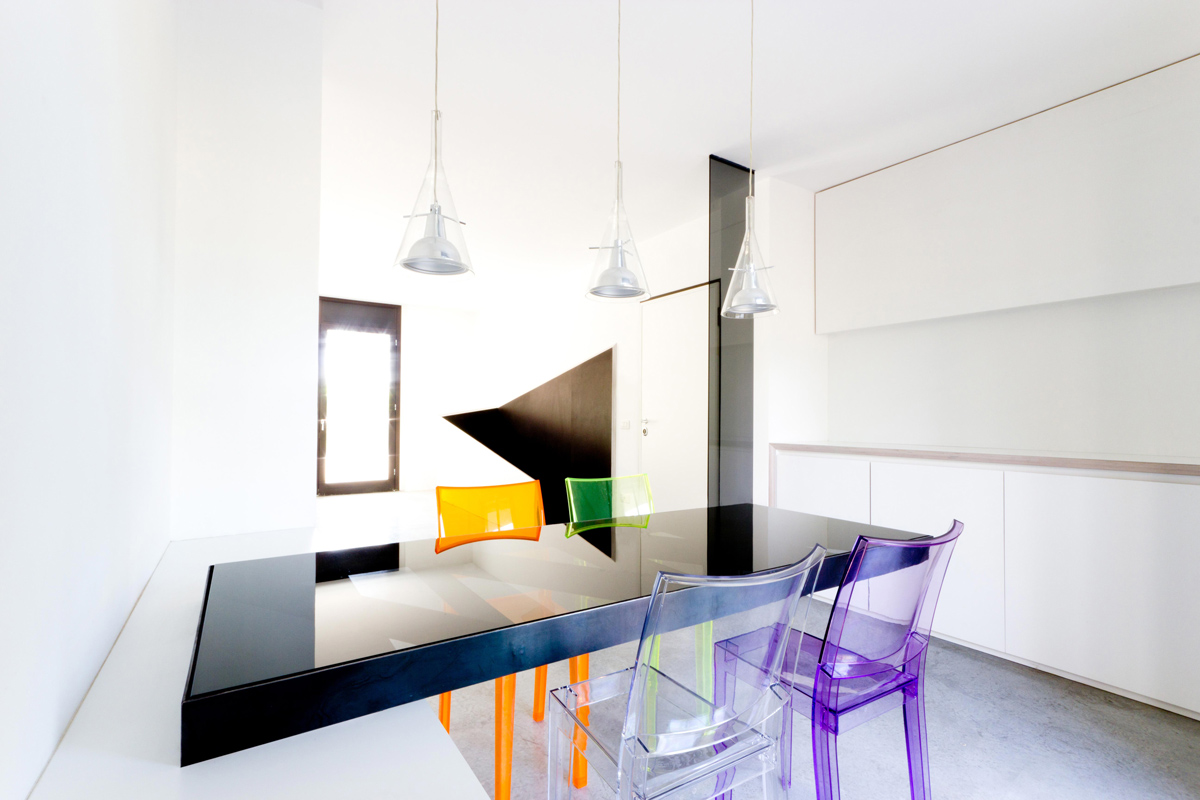 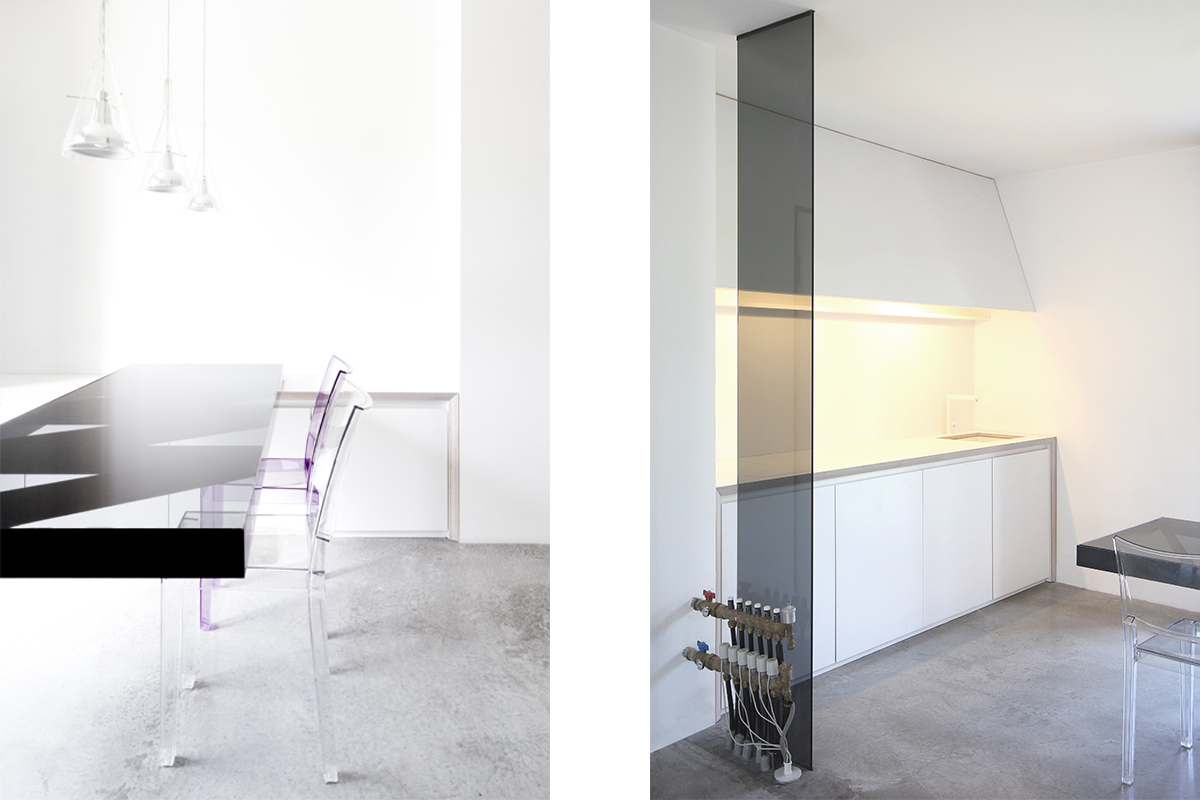 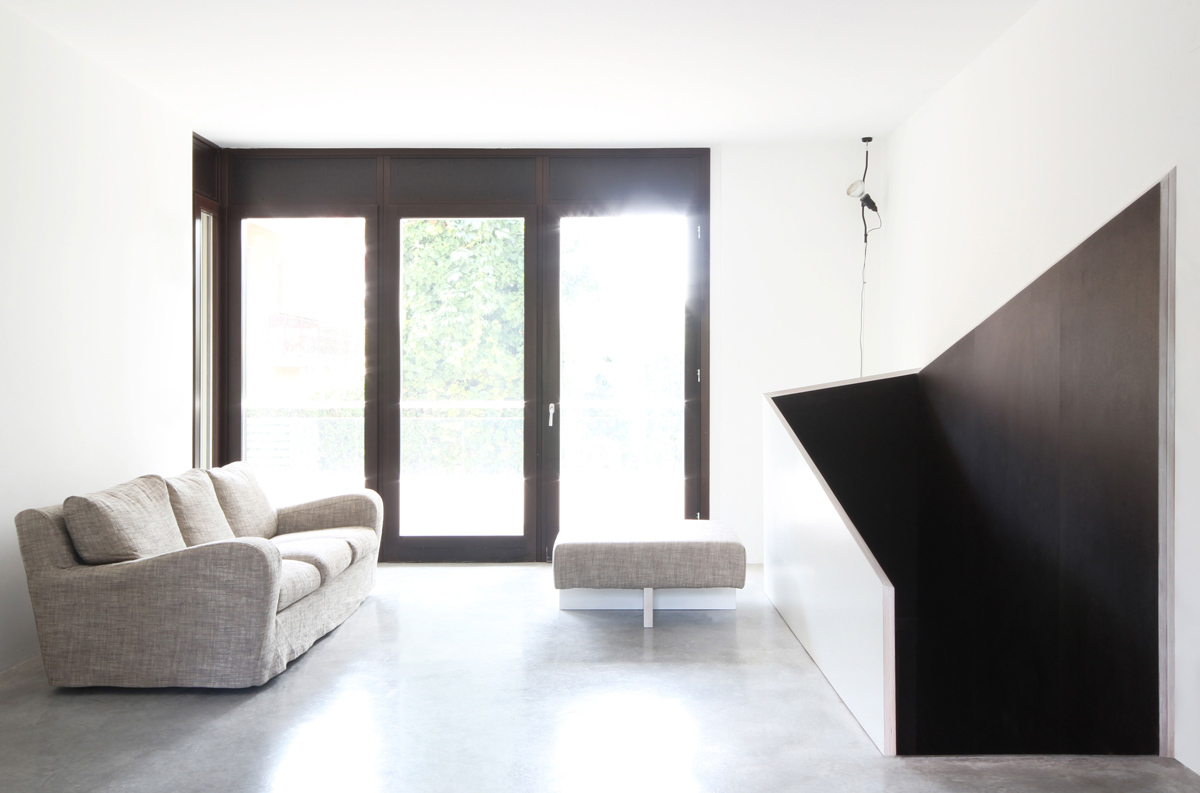 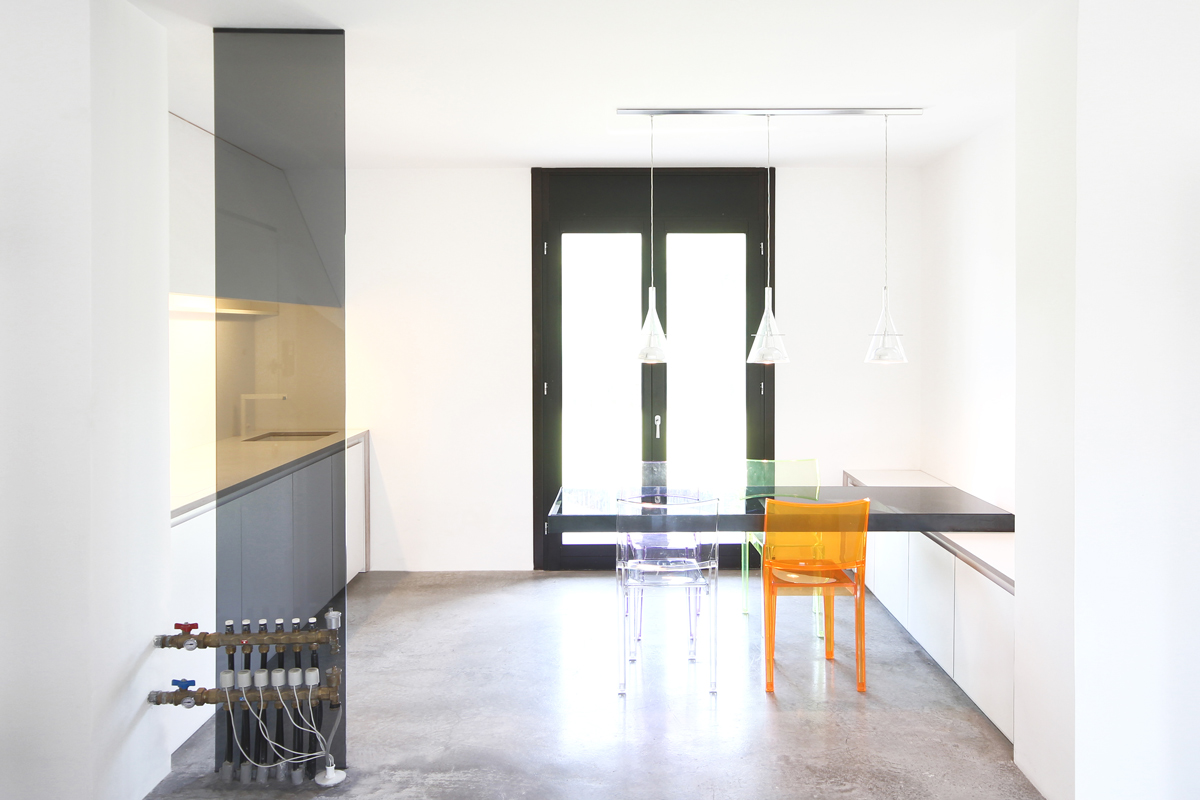 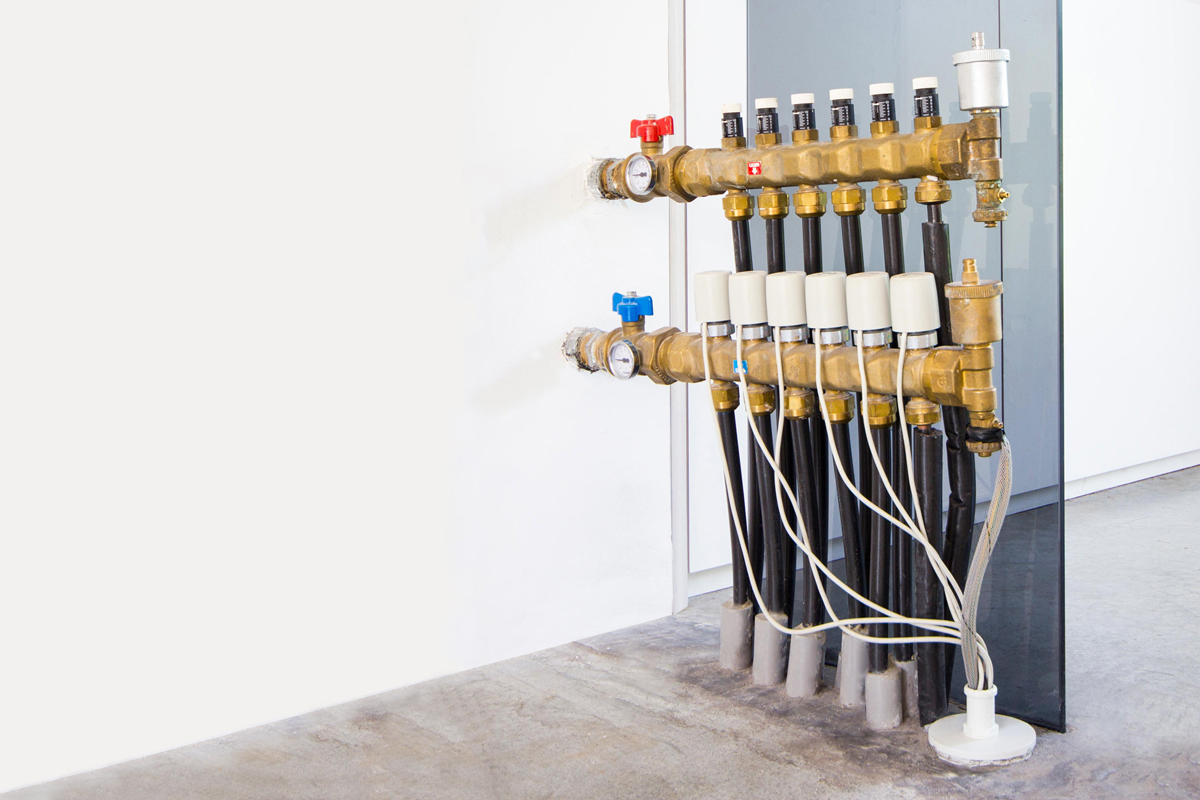 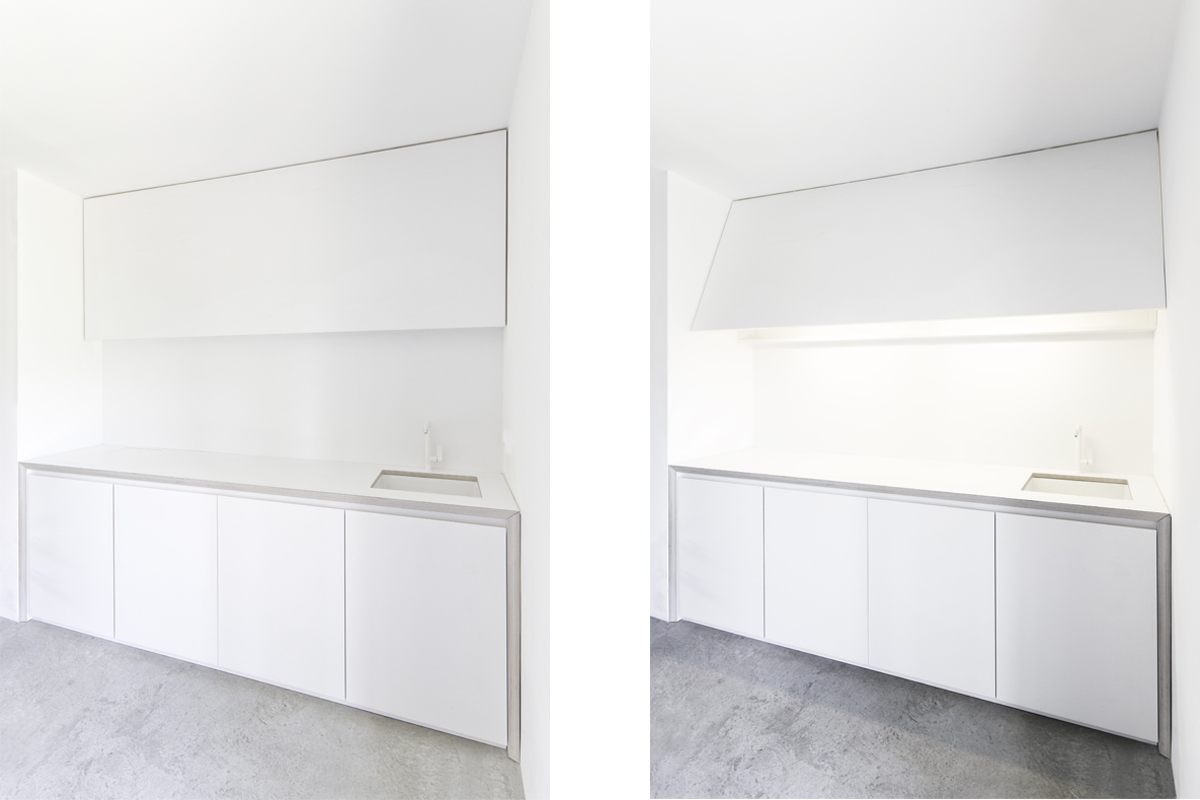 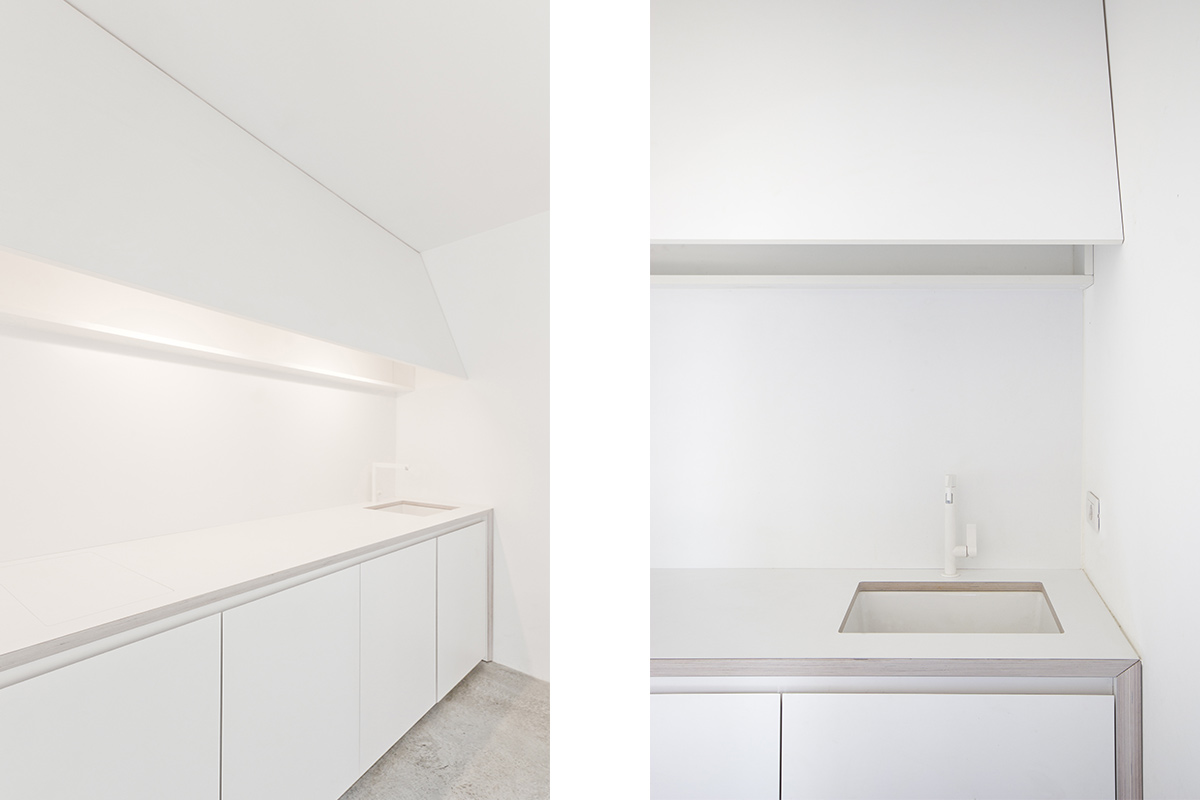 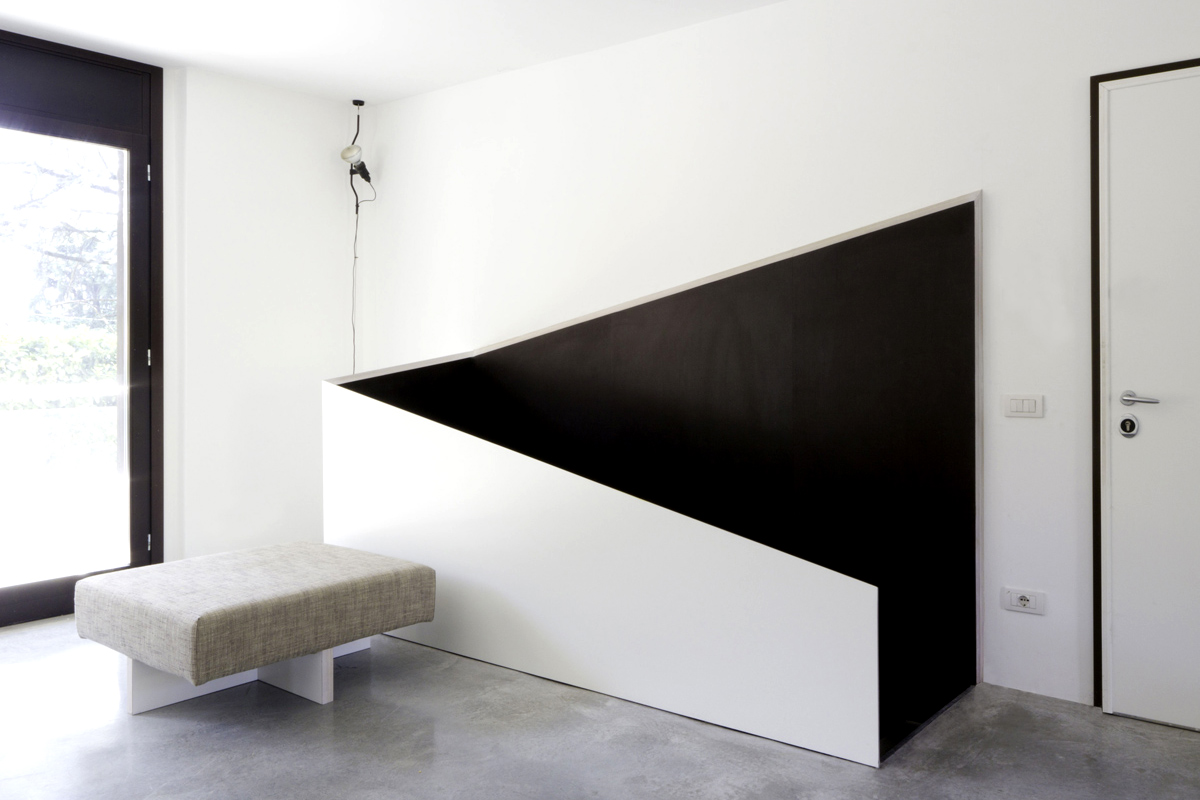 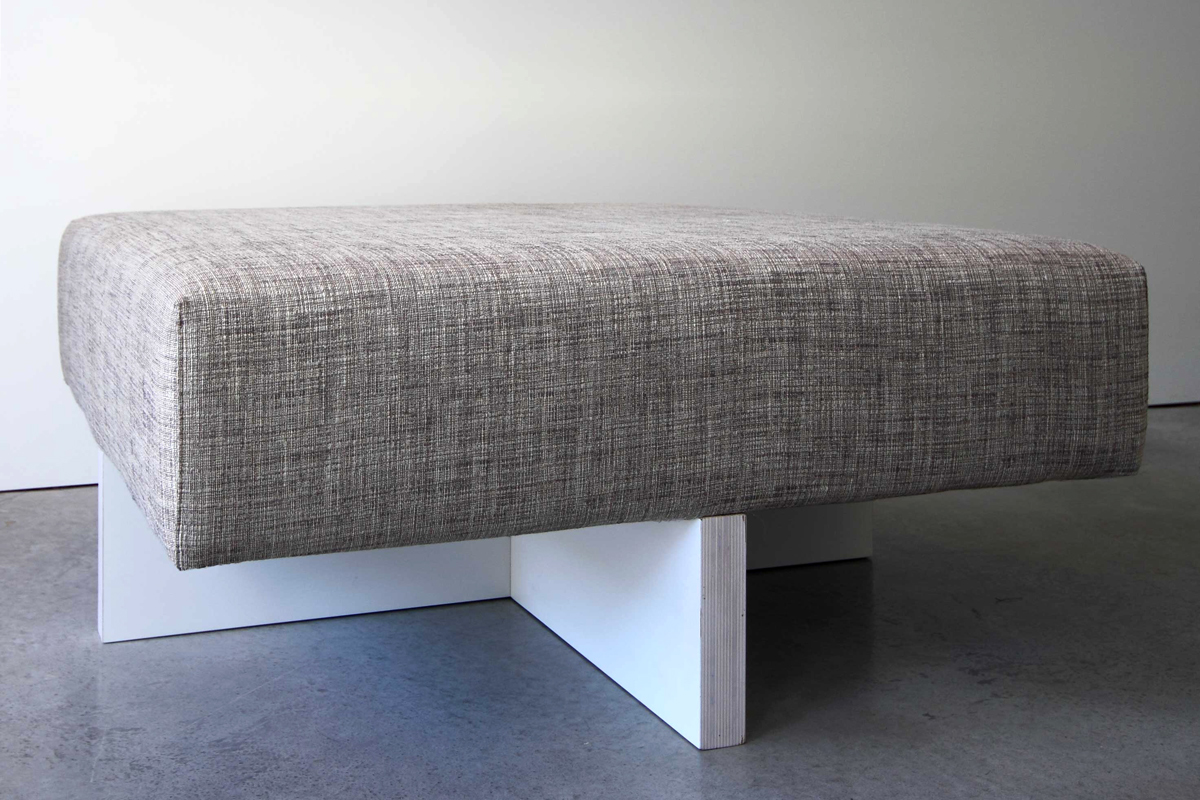 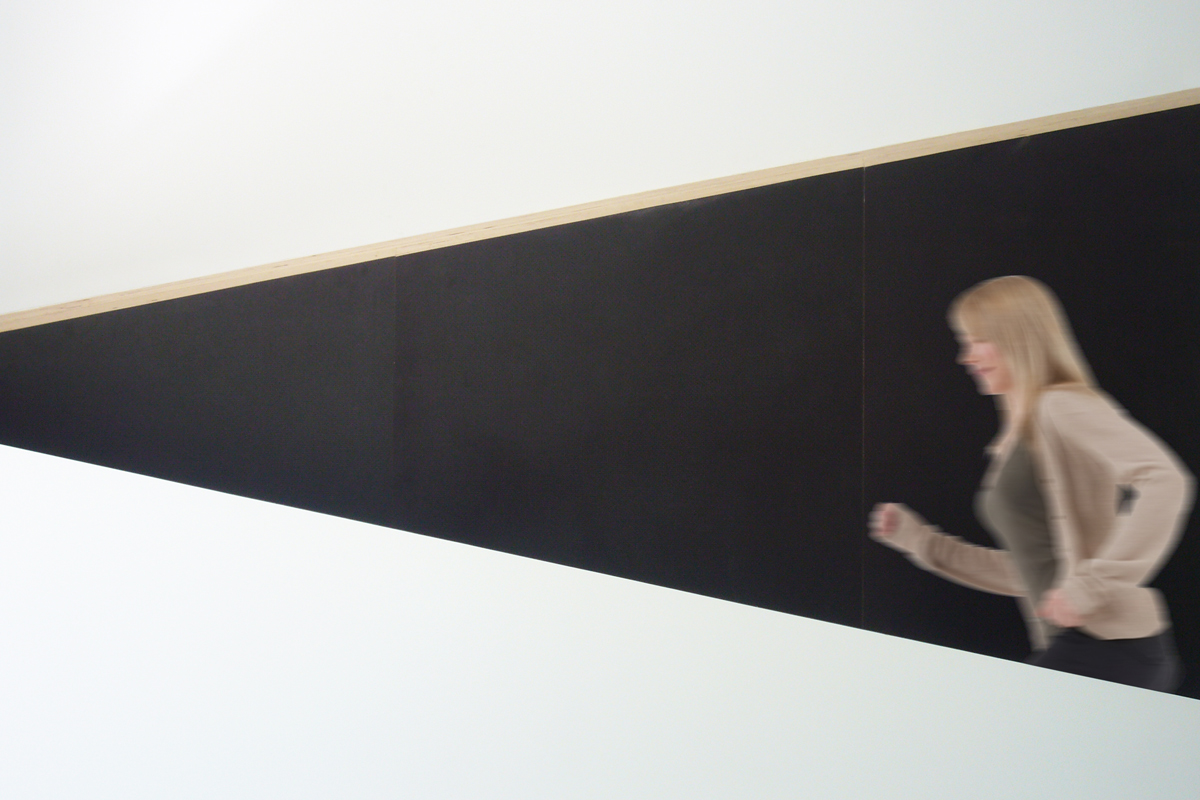 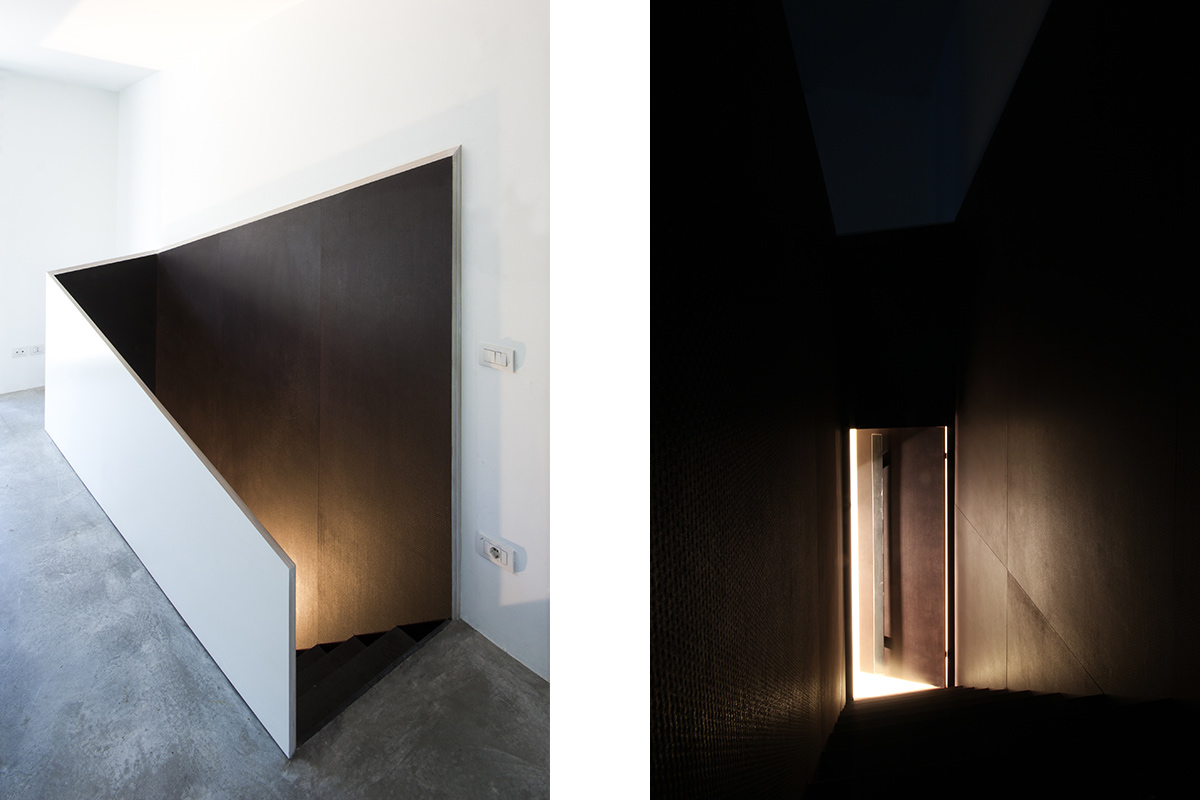 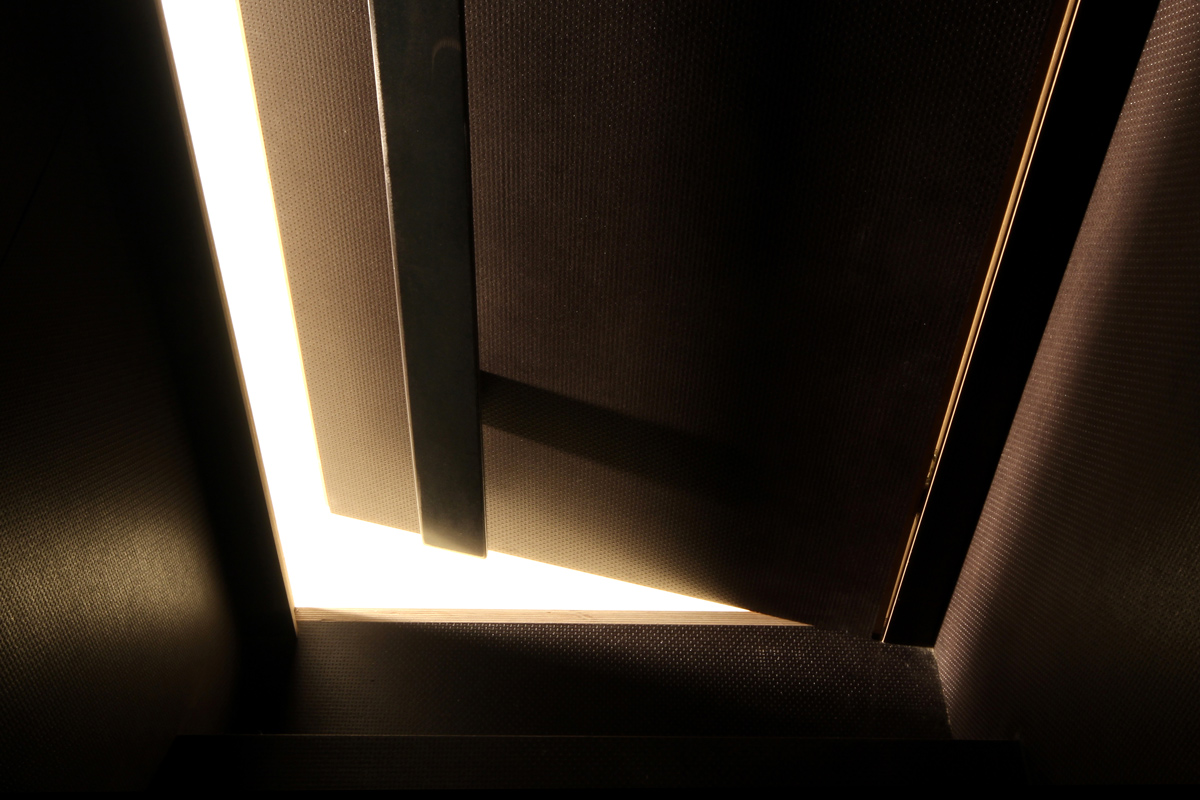 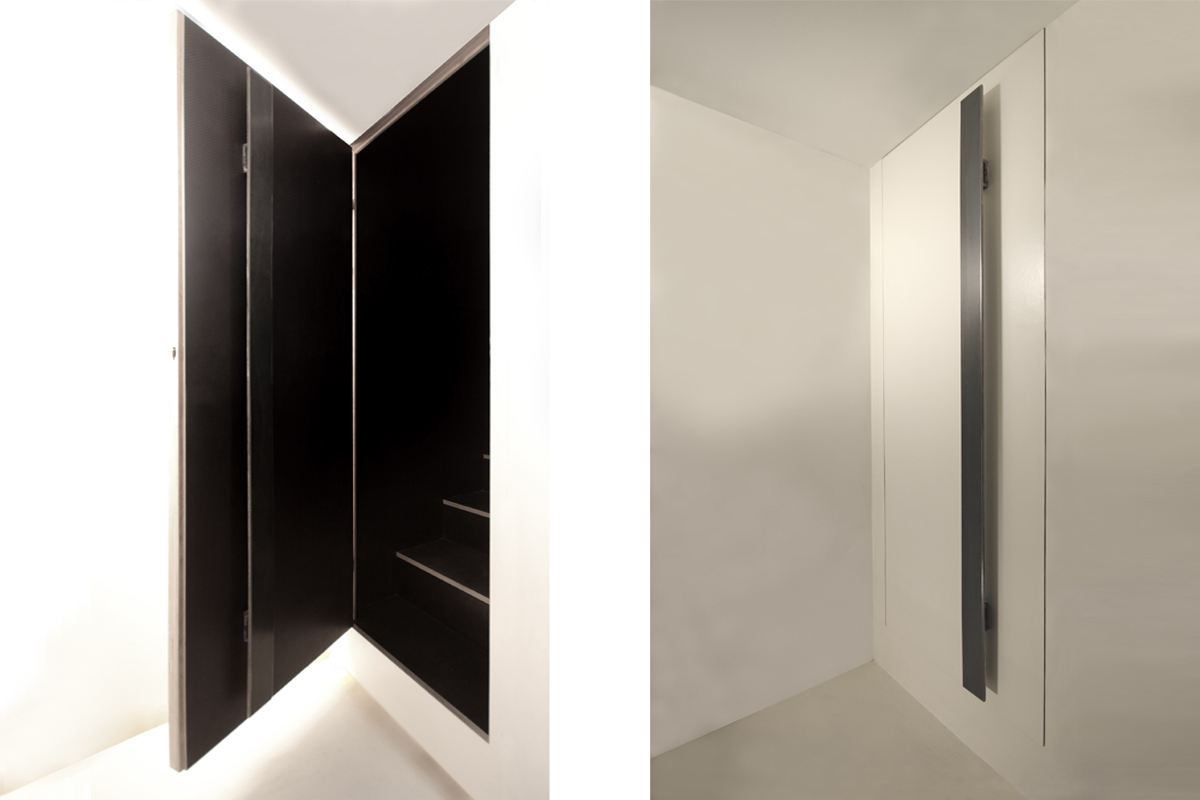 Sometimes even the single apartment inside a brand new residential complex may need radical interventions.
In this project, the focal point is the transformation of a small living area into a bright and vast open space environment.
By the demolition of a partition wall between living room and kitchen, an unified environment finished with a self-leveling cement-resin floor is obtained.

The custom-built kitchen present two opposite blocks embedded in the masonry.
The cooking block, due to its permanent exposure to the sight, is extremely minimal: the induction hob is concealed by a cap with a chopping function, the washbasin is in white ceramic, the mixer in white painted steel. The fridge is built-in under the counter.
Even more formal rarefaction is reserved above, where a huge shutter, almost invisible when closed, becomes a large natural draft hood when open.
The opposite side of the kitchen has low containers on which rests a table of steel and smoked glass that juts out in a scenographic way.
The table was built by welding iron plates, the supporting legs and anchoring to the wall are completely hidden from view.

In the living room, another partition was demolished, which in this case concealed a stairwell connecting to the typical italian residential basement, taverna.
Taverna are, architecturally speaking, the absolute evil.
That said, like the innumerable manifestations of evil, whether we like it or not, they exist.
Trying to make them suitable for human life was one of the issues we had to face.
The descent into the subsoil is emphasized by the cladding of a banal staircase made of reinforced concrete with non-skid laminated plywood, normally used for stages or trucks lorries (carply).
The panels are composed as an origami that floats on the sea of cement.
A door closes the staircase for thermal reasons.
The dark space of the staircase contrast with the dazzling over-illumination of the basement, whose walls have been painted with a particular varnish that multiplies the artificial and natural light. 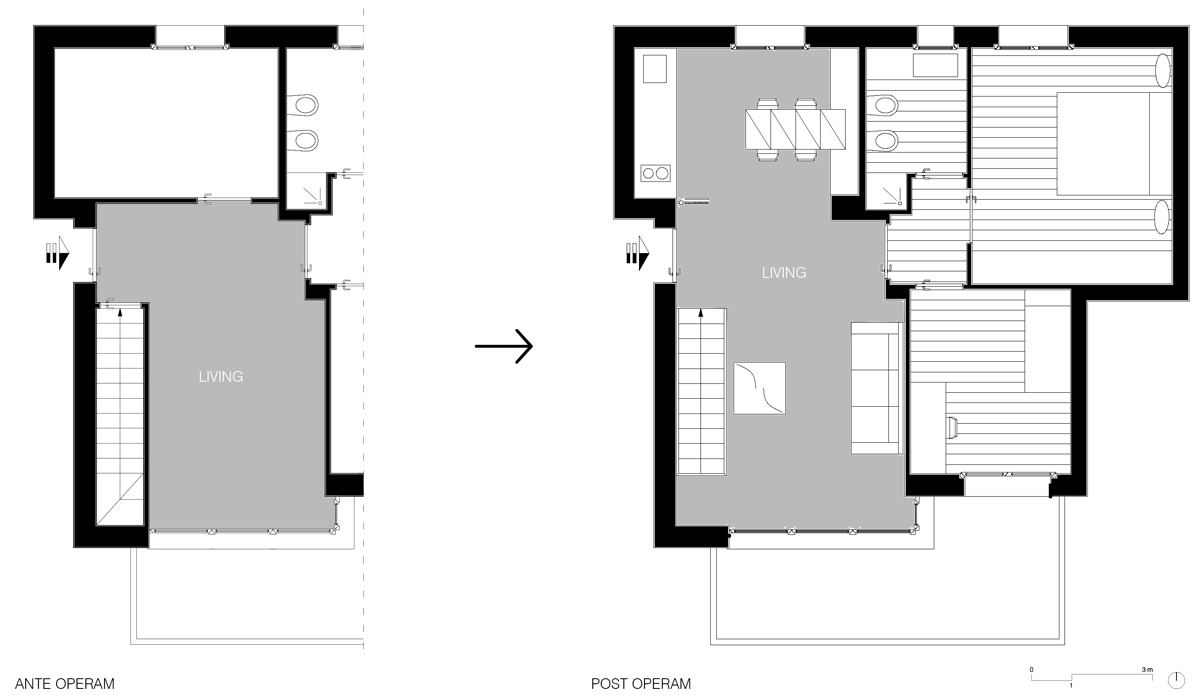 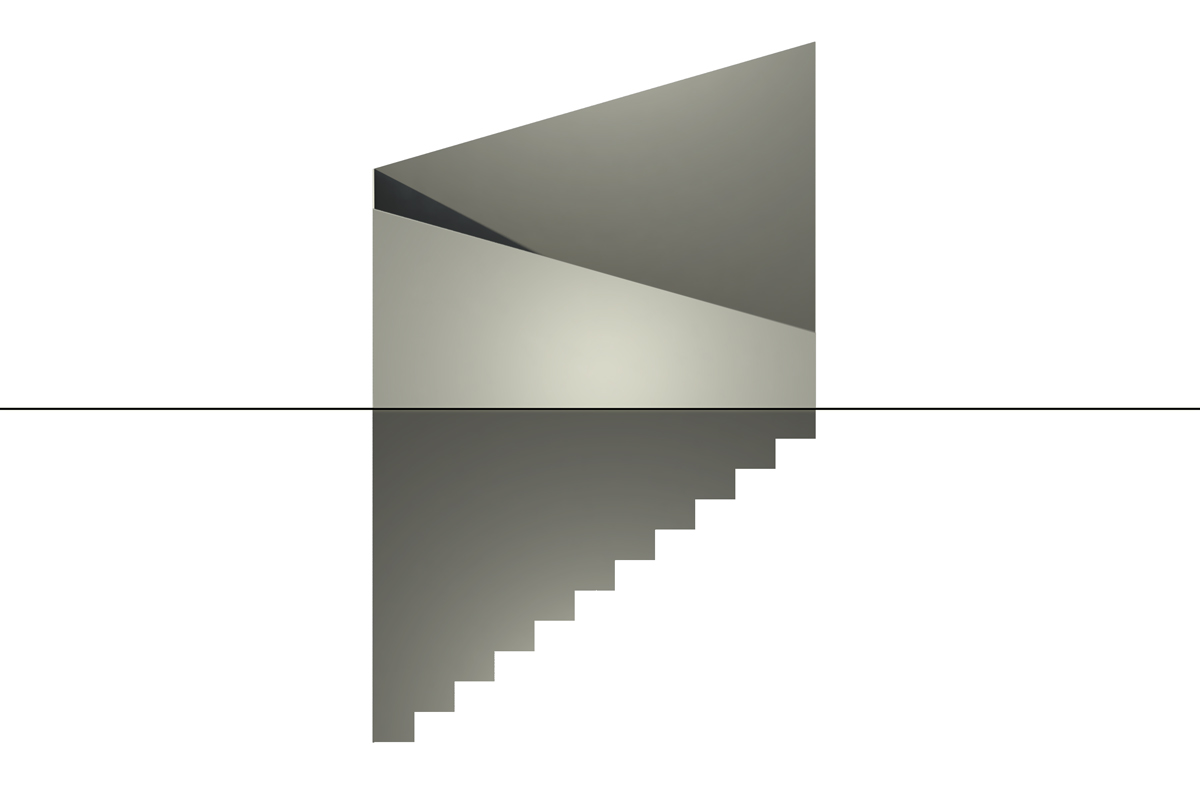