In the context of the radical image renewal that Logitech has undertaken recently, Hypnos was called to redesign the Italian headquarters.
Starting from an identity of manufacturer suited to produce affordable, yet perfectly built, PC peripherals, Logitech has now been distinguishing itself by offering a very high level of design. This transformation led to quadruple its profits and at the same time win many design prizes.
Together with the renewal of the products design, came a new corporate graphics and a refreshed corporate communication, till the decision to afford the architectural renewal of all the corporate offices scattered around the four corners of the planet.
The existing situation of Milan office, in which the Italian branch already operated, was quite far from the image of a tech company that one would expect to find. Plastic wood floor, old mineral fiber falseceiling, cheap veneered cabinets and metal displays arranged randomly in a large room.
The client’s brief included sixteen openspace workstations, three meeting rooms, two phoneboots, a cafeteria and a lounge area where the company’s flagship products could be deployed, a sort of demo room for visitors. Beyond the functional data, there was a clear target: completely revolutionize the aesthetic impact of the office.
The large open space is divided into two parts. The first area is an Agorà that welcomes the visitor, while providing an informal meeting space for employees.
After crossing a filter area where the phoneboots are located, find place the most operative office with desks and meeting rooms. 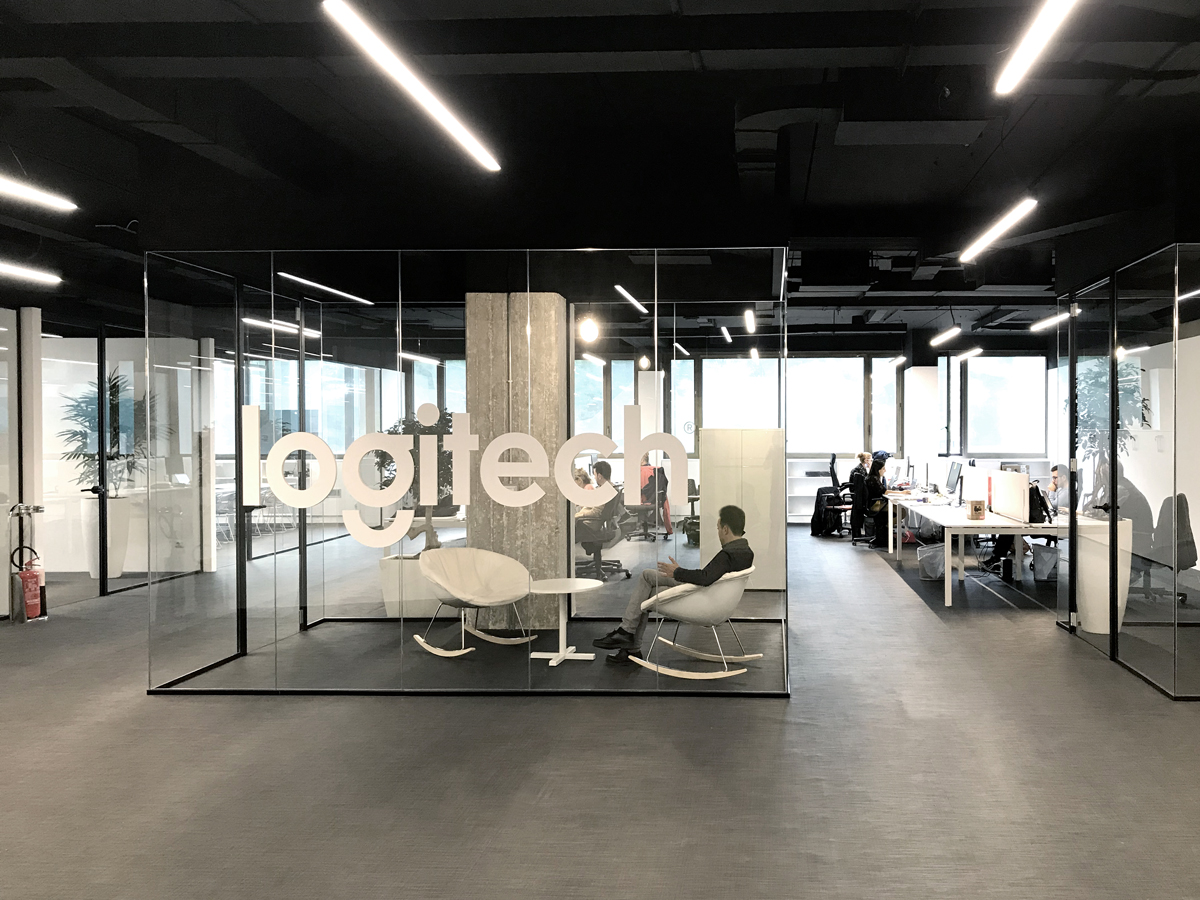 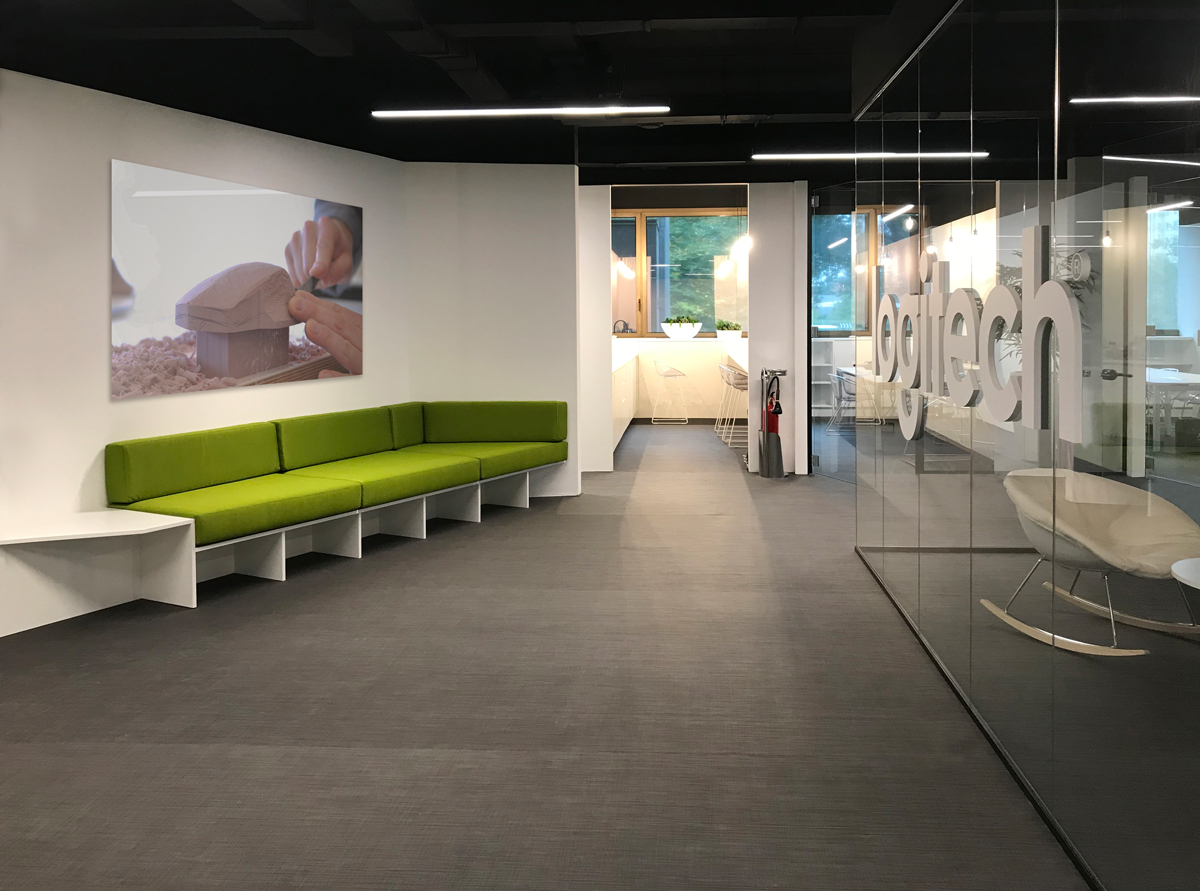 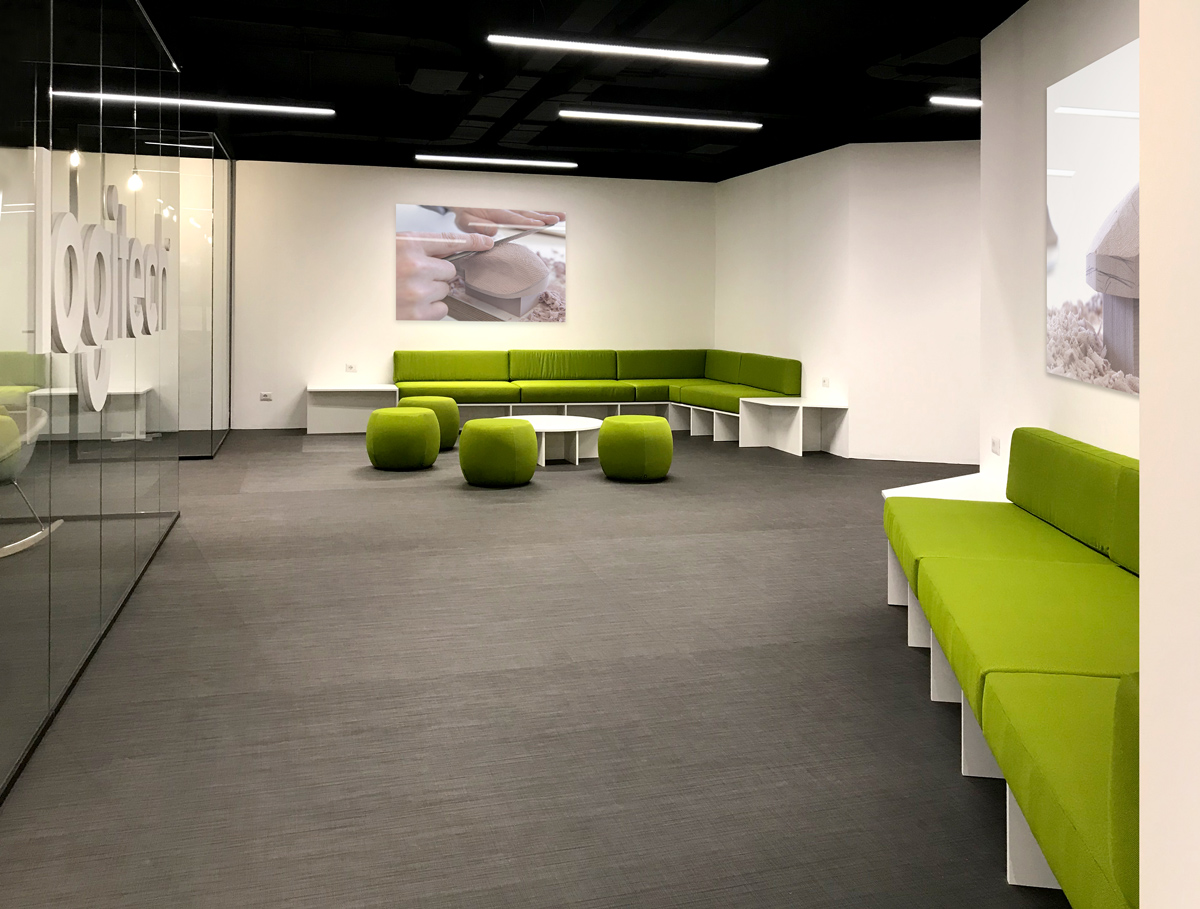 The Agorà space is designed from a research around the DNA of Logitech products. A formal identity that starts from ergonomics, to reach, in recent years, very sharp and futuristic connotations, especially in gaming products.
What was once called the waiting room, becomes the space in which corporate values are made explicit and communicated.
Starting from the ergonomically designed shape of the mouse, we have designed an enveloping space, which surround people like in a square.
A spatial basin, which owes its formal genesis to the concavity of the hand that surrounds its prosthesis par excellence: the mouse!
The Logitech Agorà is a place where products are tested but above all where people meet. After all, the future of the office is clear: no longer a place to “do the work”, but a place where you “discuss the work”. In other words, no longer the place of execution, but the place for problem-solving, collaboration and human interaction. 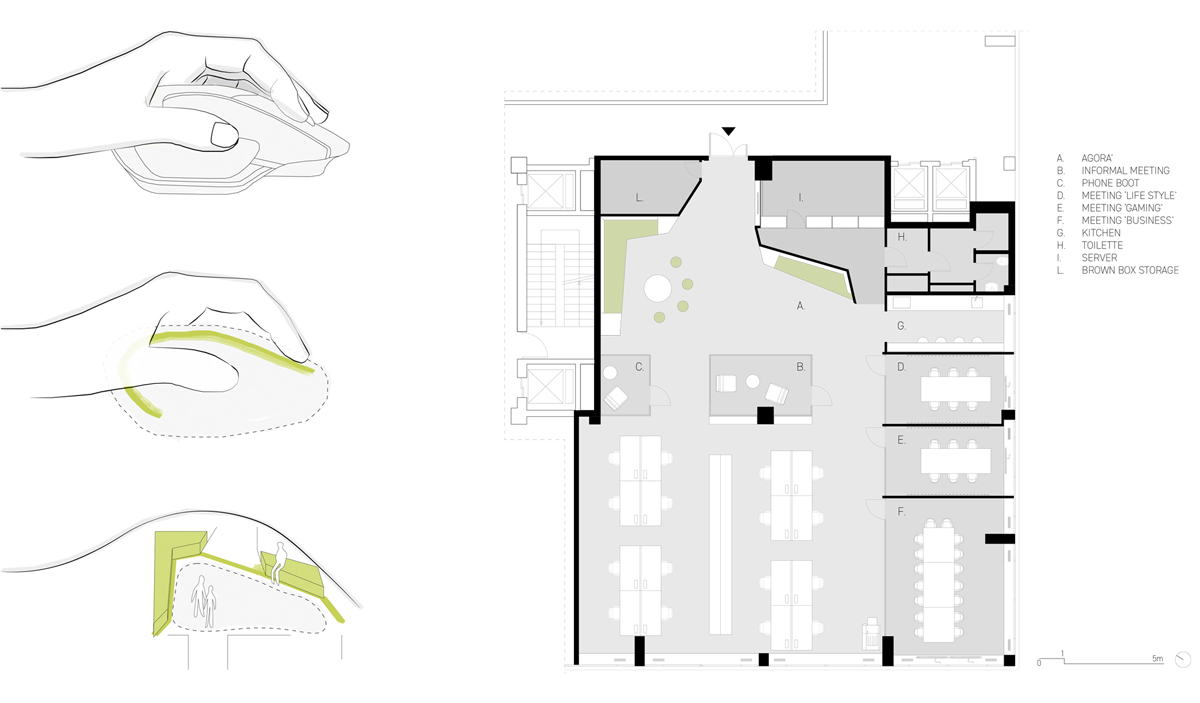 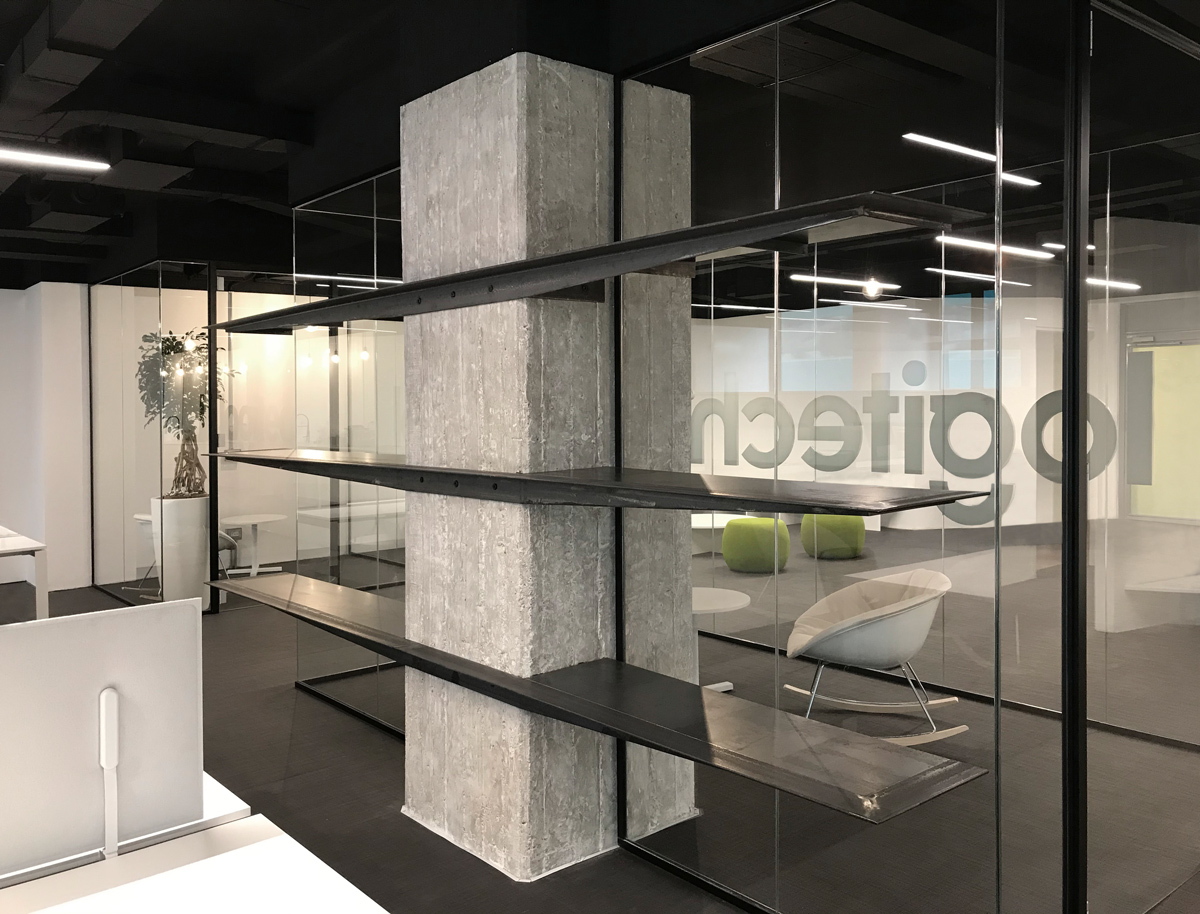 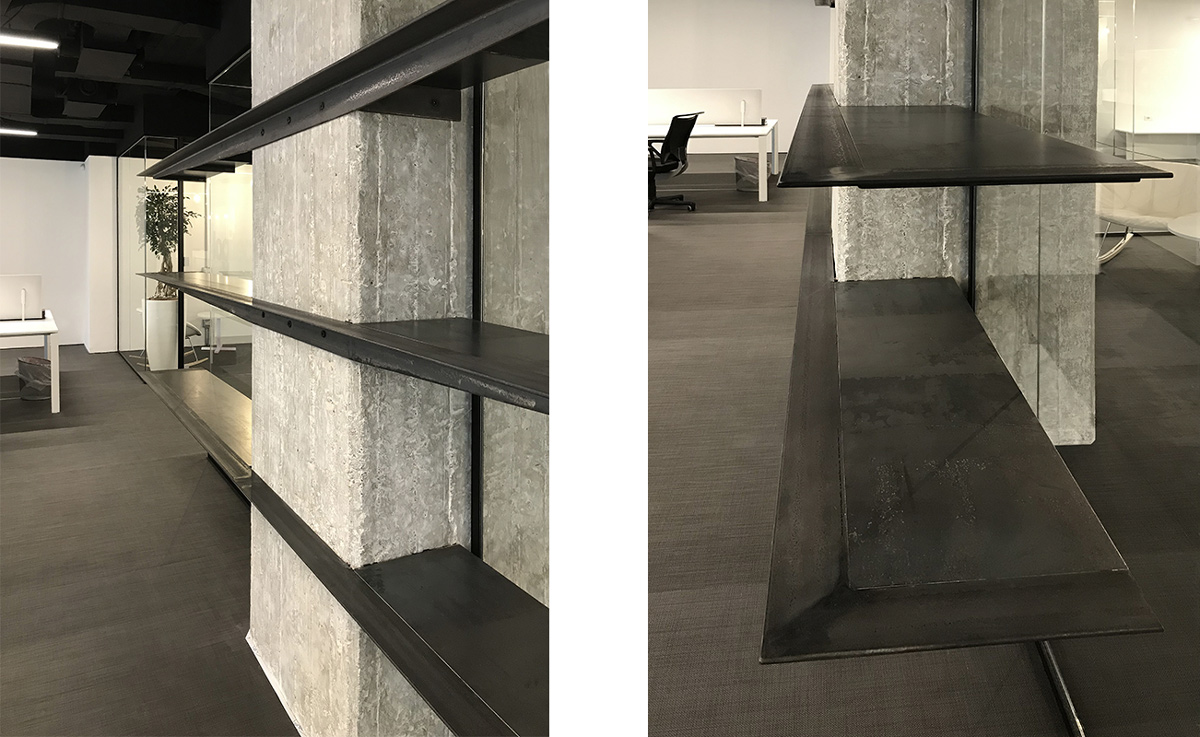 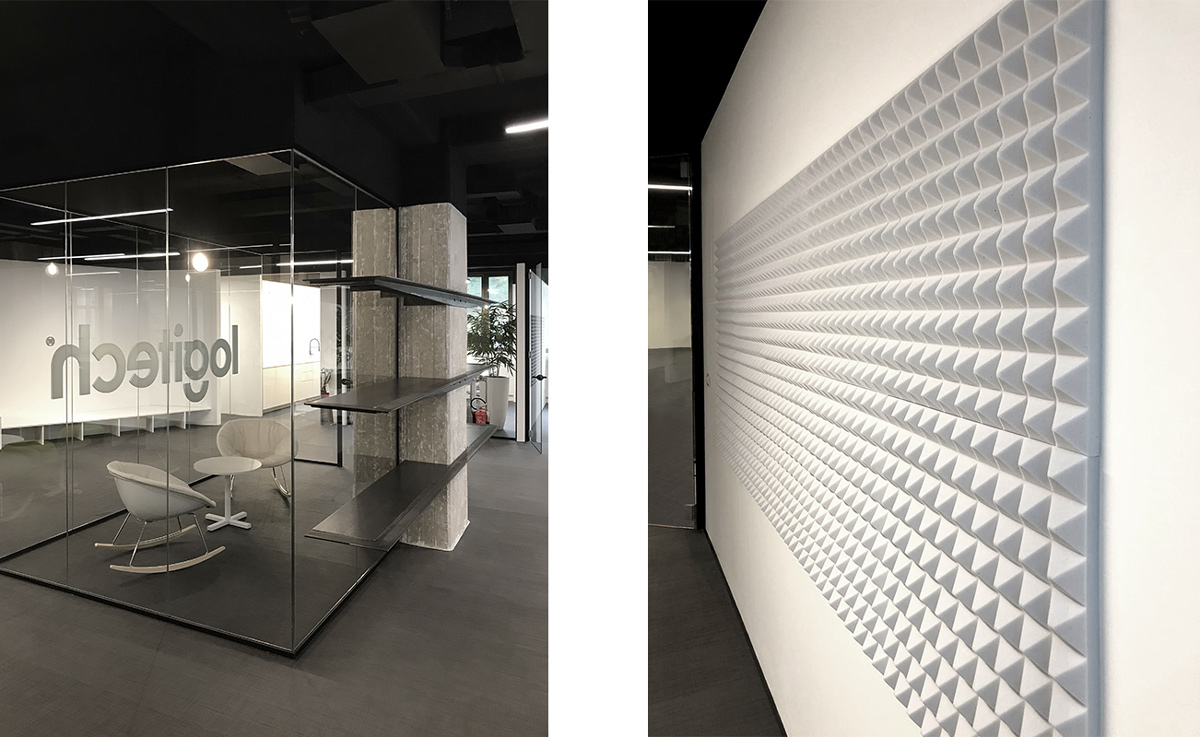 In the middle of the open space, a single structural pillar stood out isolated. It was decided not to attempt a vain concealment, but, at the opposite, to emphasize even more its presence, transforming it in the spatial pivot of the office. Its entire surface was scraped to the raw concrete, then long cantilevered steel shelves were hang on it. With its sharpen design, the bookshelves investigate a language analogy towards gaming mouses.
Managing the presence of colors from Logitech’s complex palette was quite difficult.
So the office was thus conceived as a black and white landscape.
Furniture, accessories and walls are all in white and vertically enclosed within two black fields, the floor and the ceiling, to emphasize the panoramic horizontality of the space.
The floor is a vinyl woven tatami that covers the existing floor. Once unrolled and glued, it becomes a continuous floor, without any joints. Unlike cements and resins, it remains very soft when walked on, giving excellent noise reduction performance.
About ceiling, it was decided to dismantle the quite oppressive existing false ceiling. All the hvac and technical elements are visible, but from the height of 270 cm, everything is painted in matt black.
The new LED pendant lamps are set on this level, so that the ceiling actually disappears in the backlight. 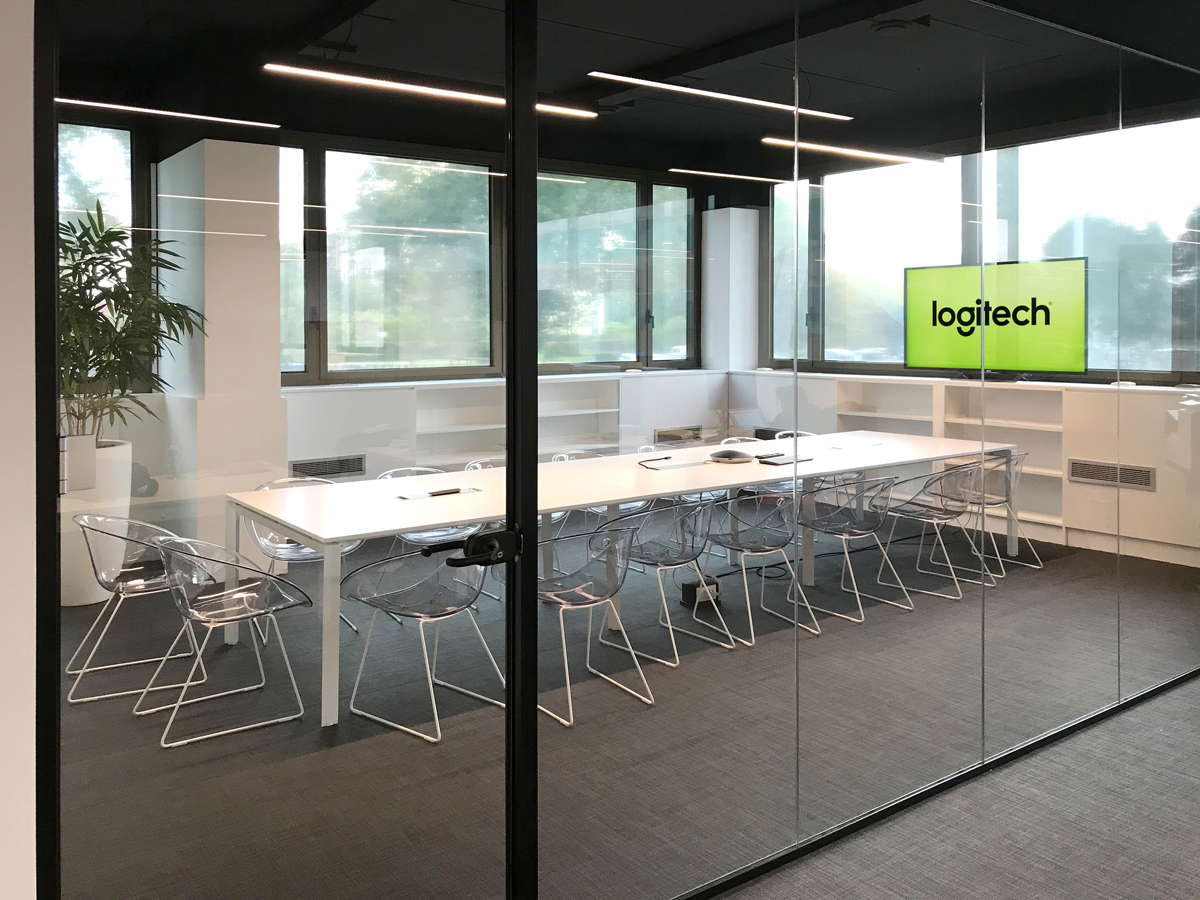 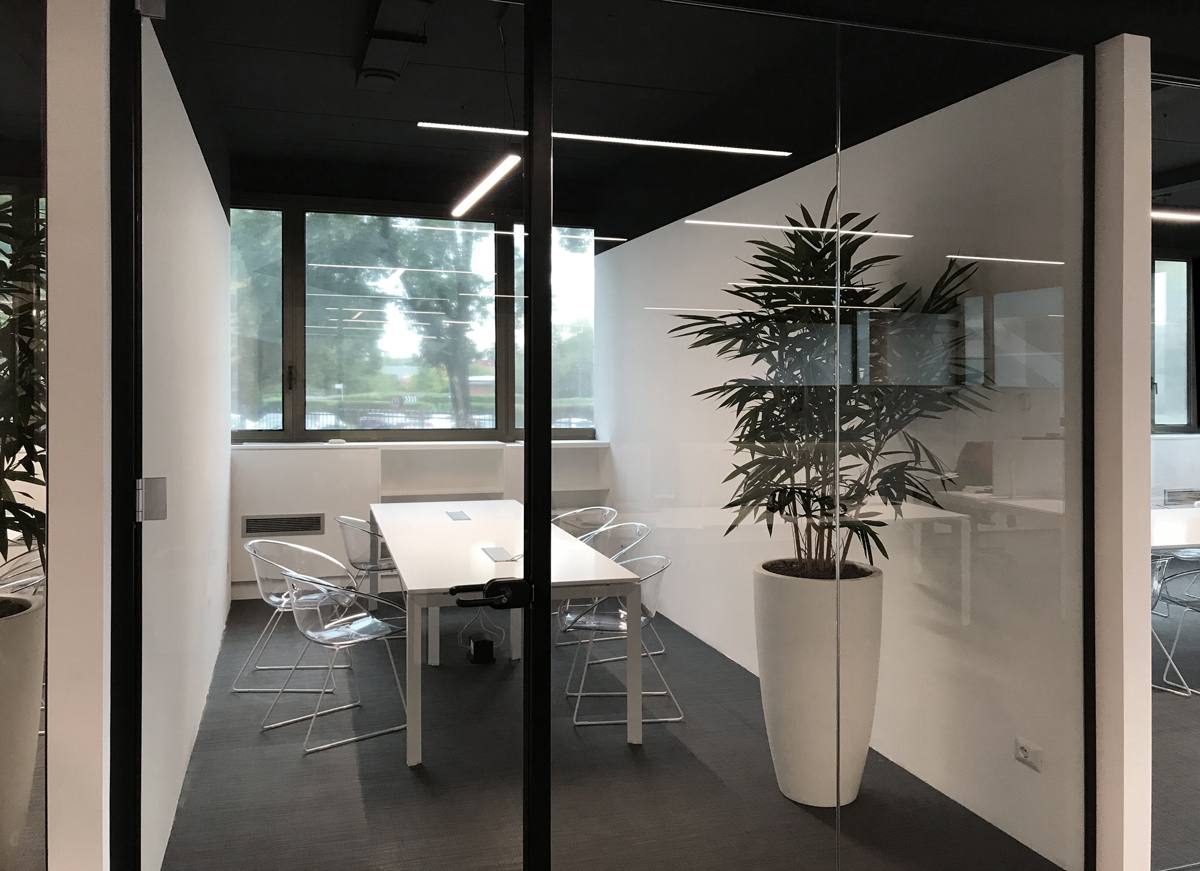