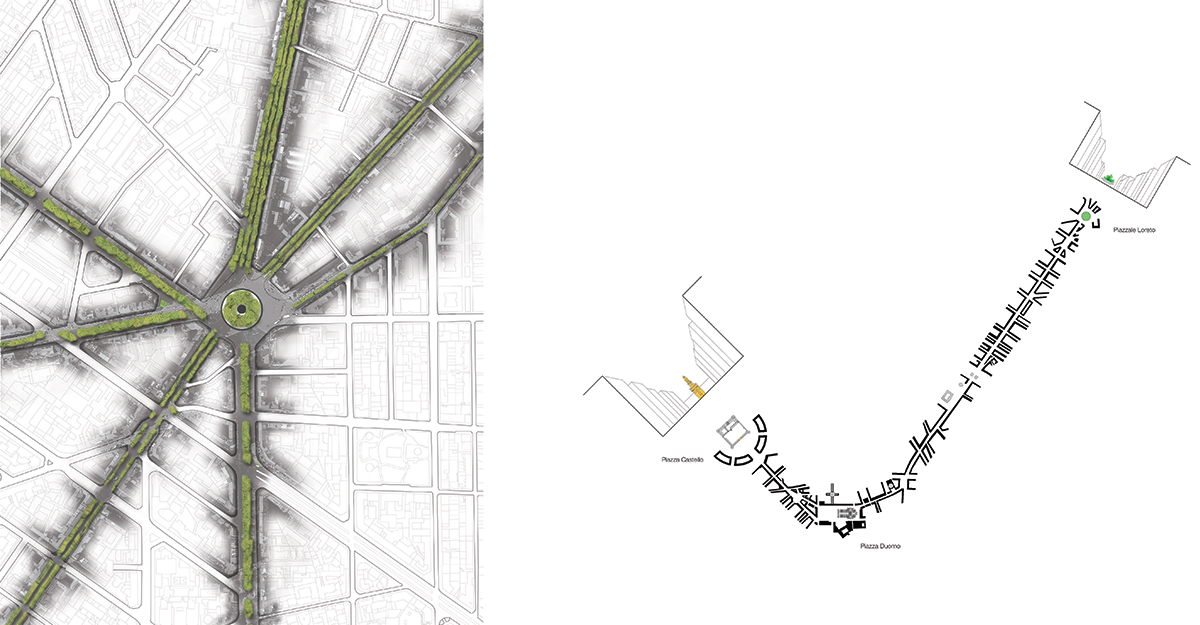 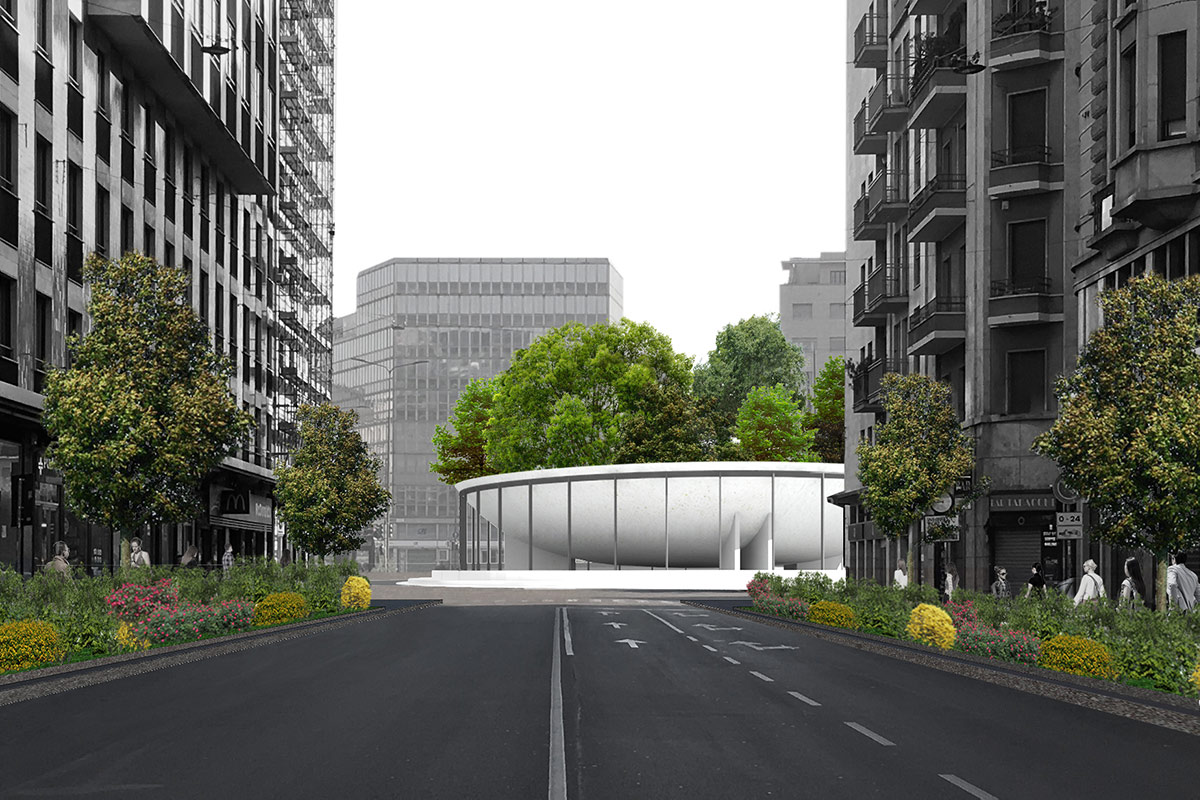 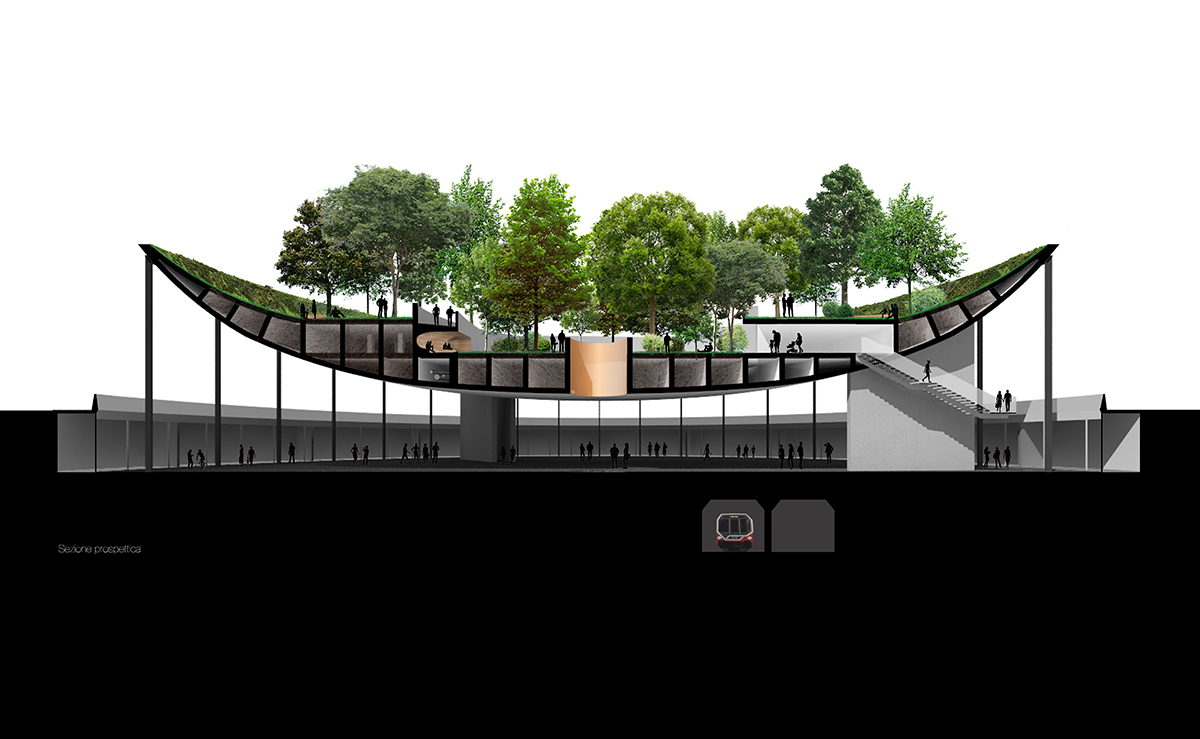 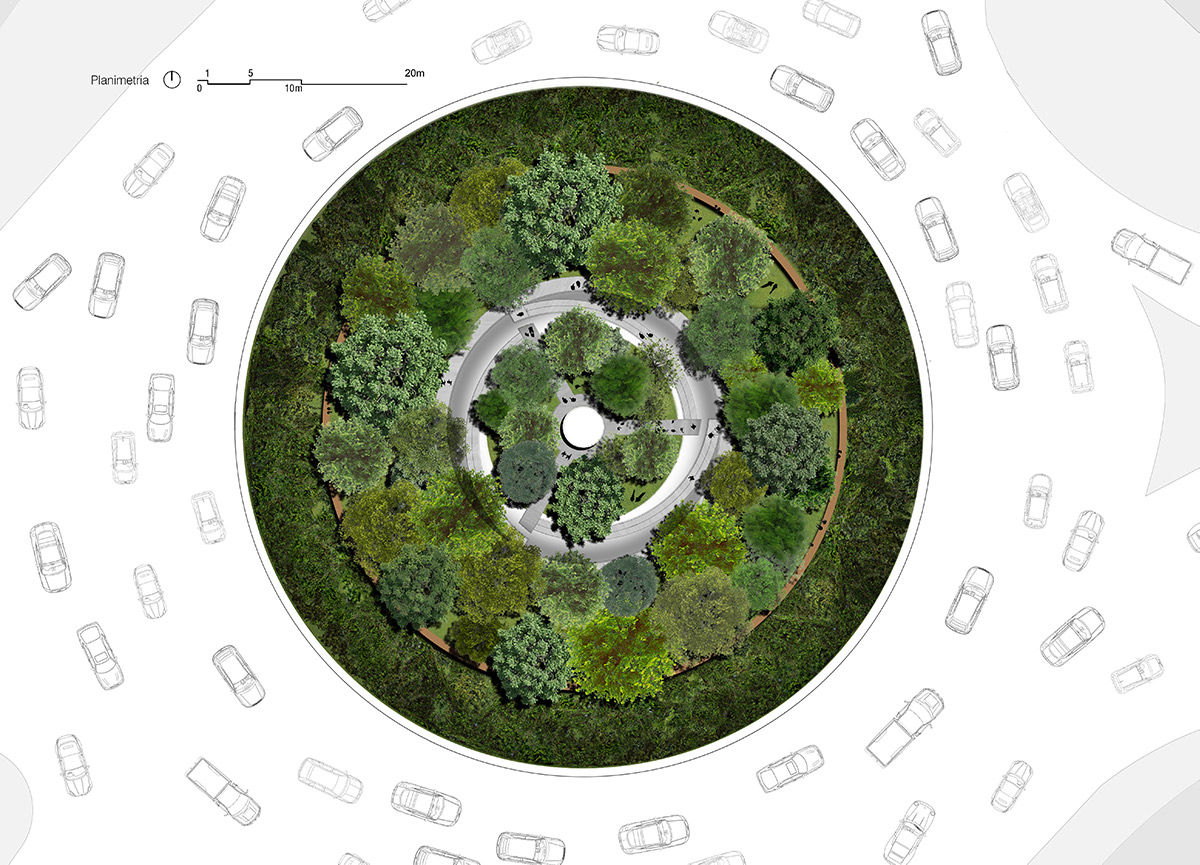 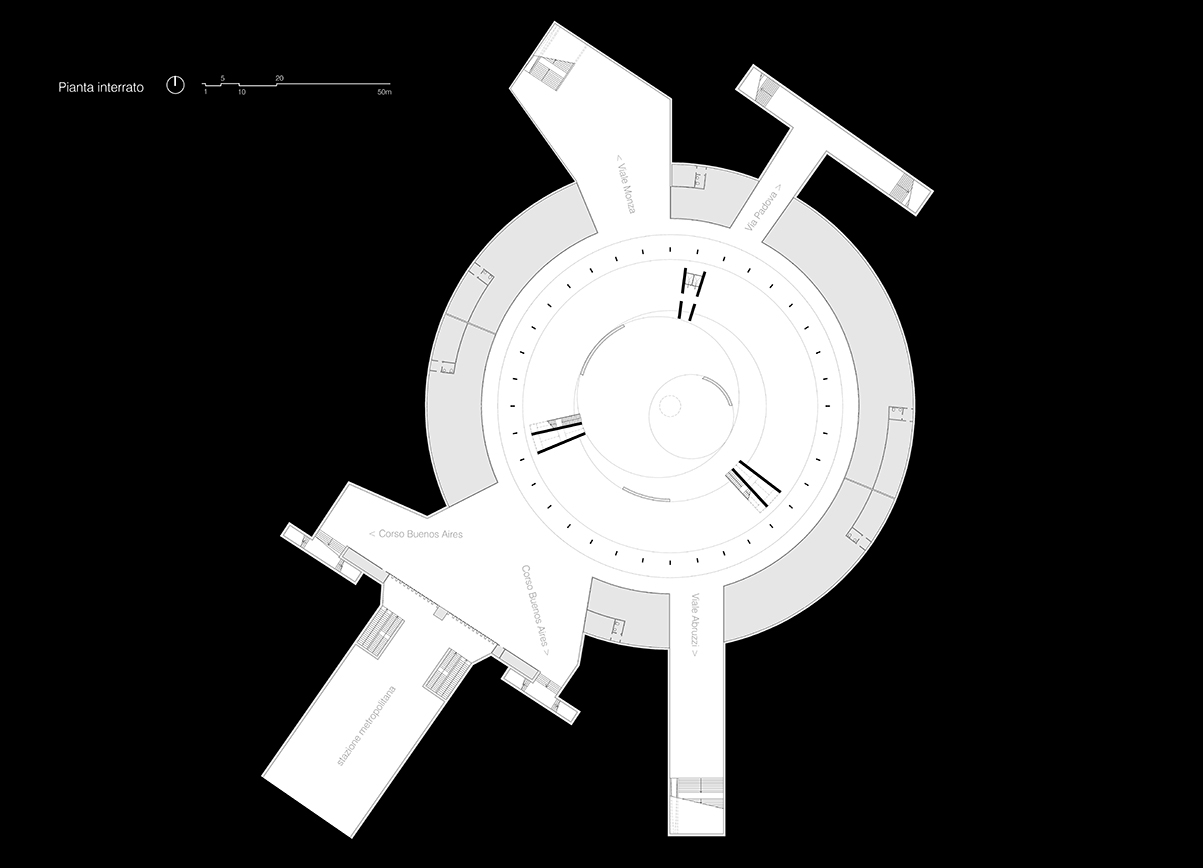 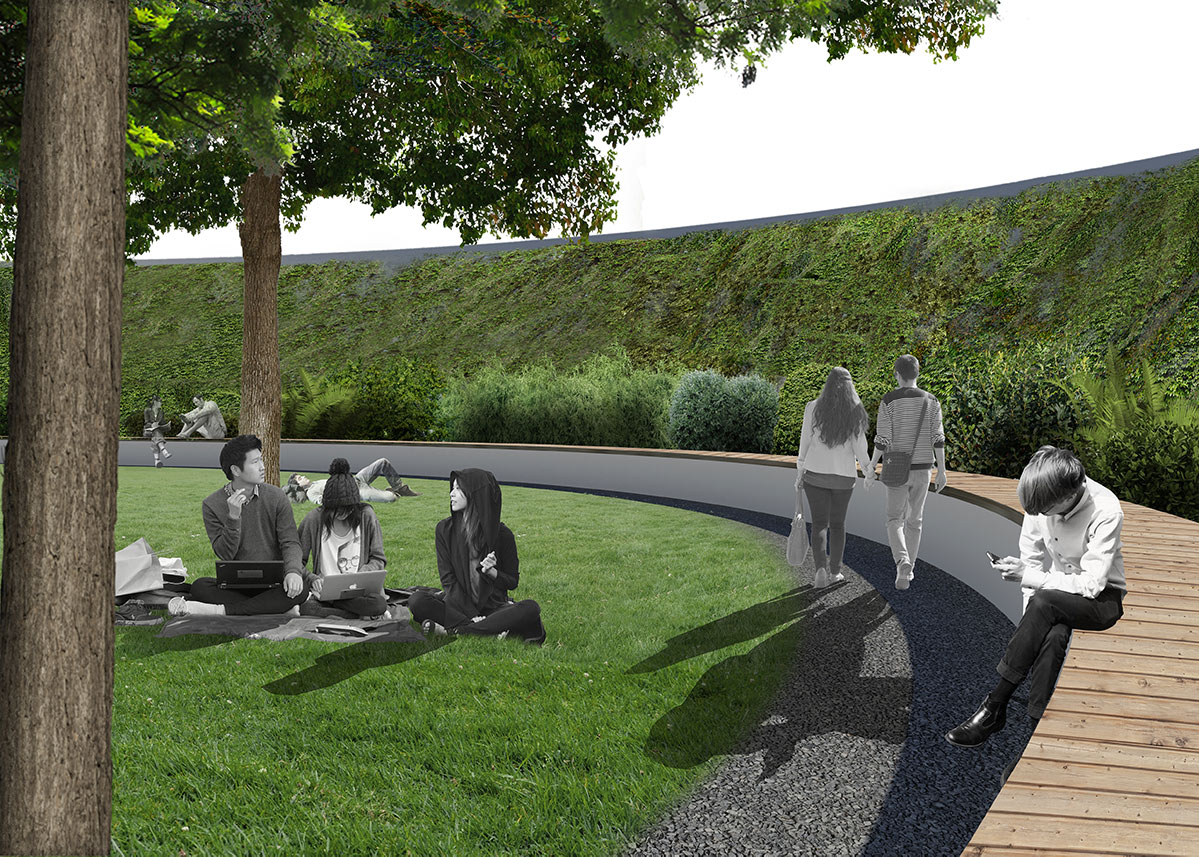 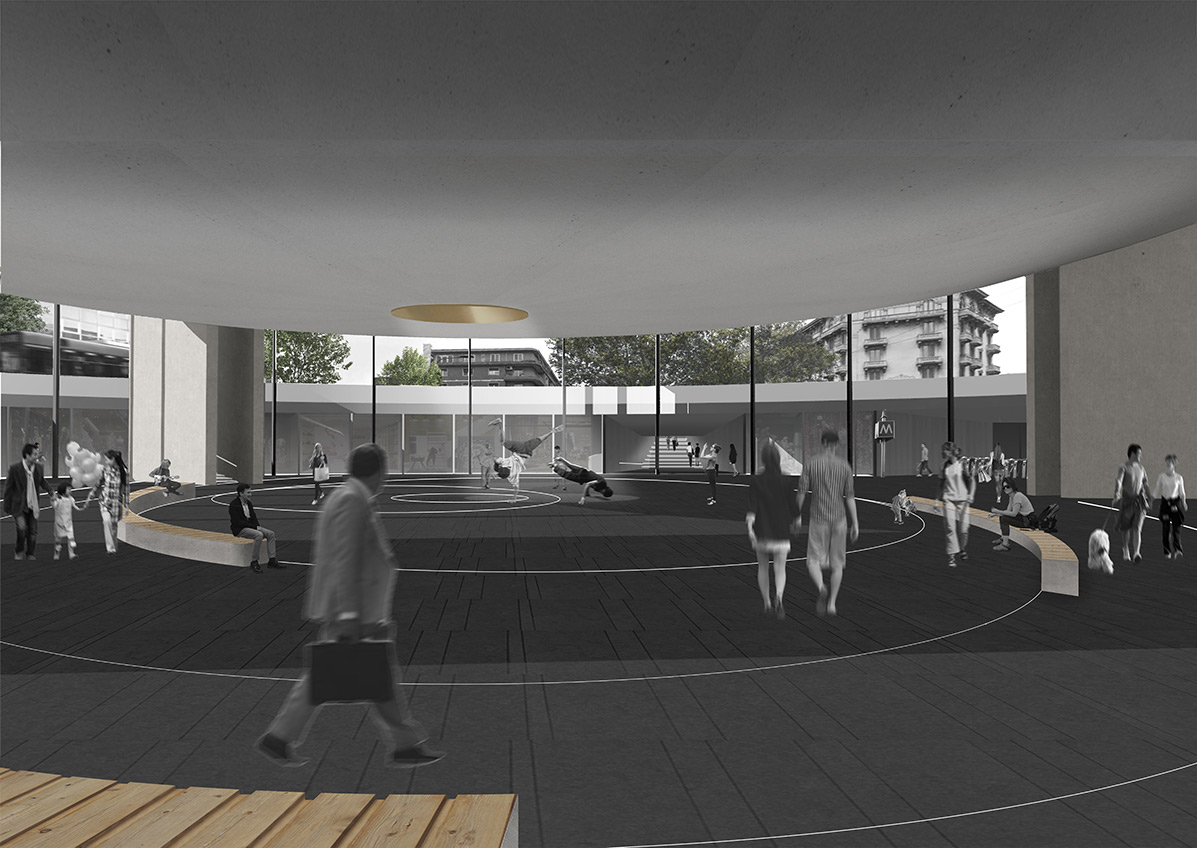 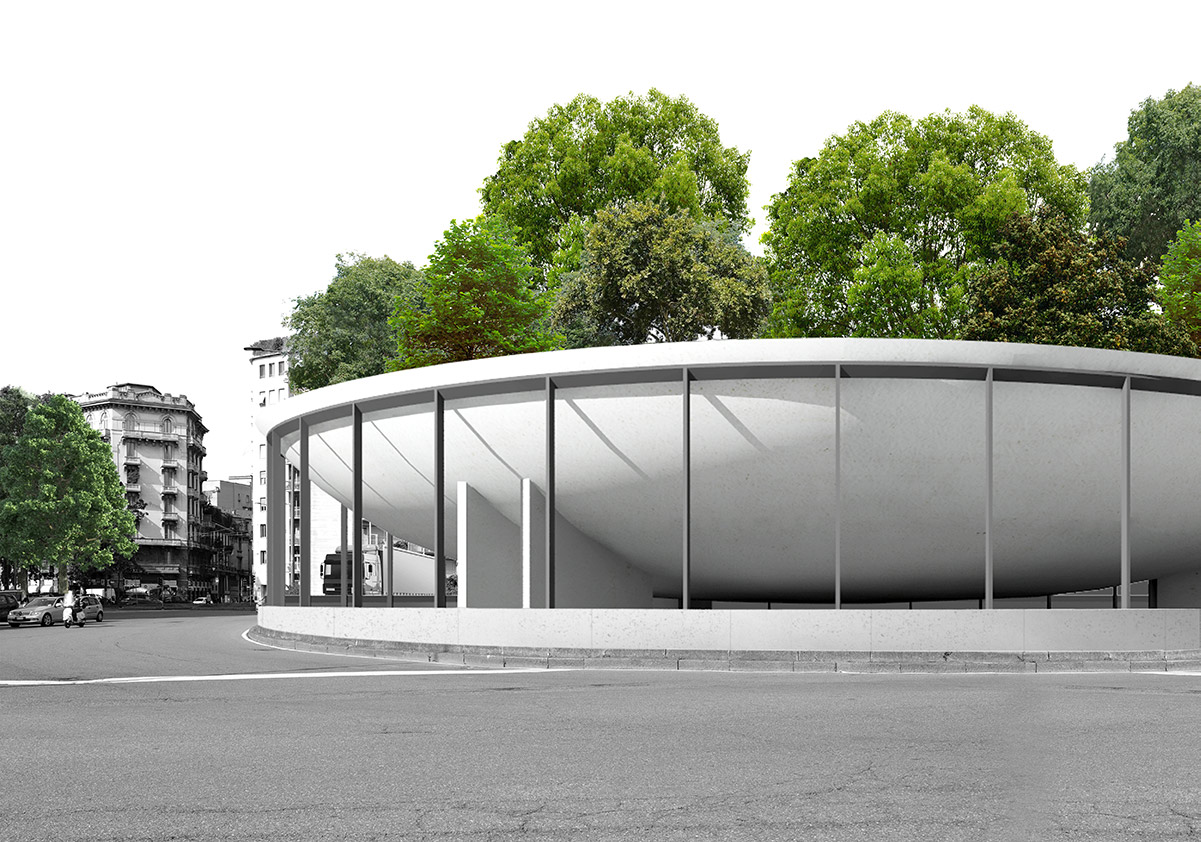 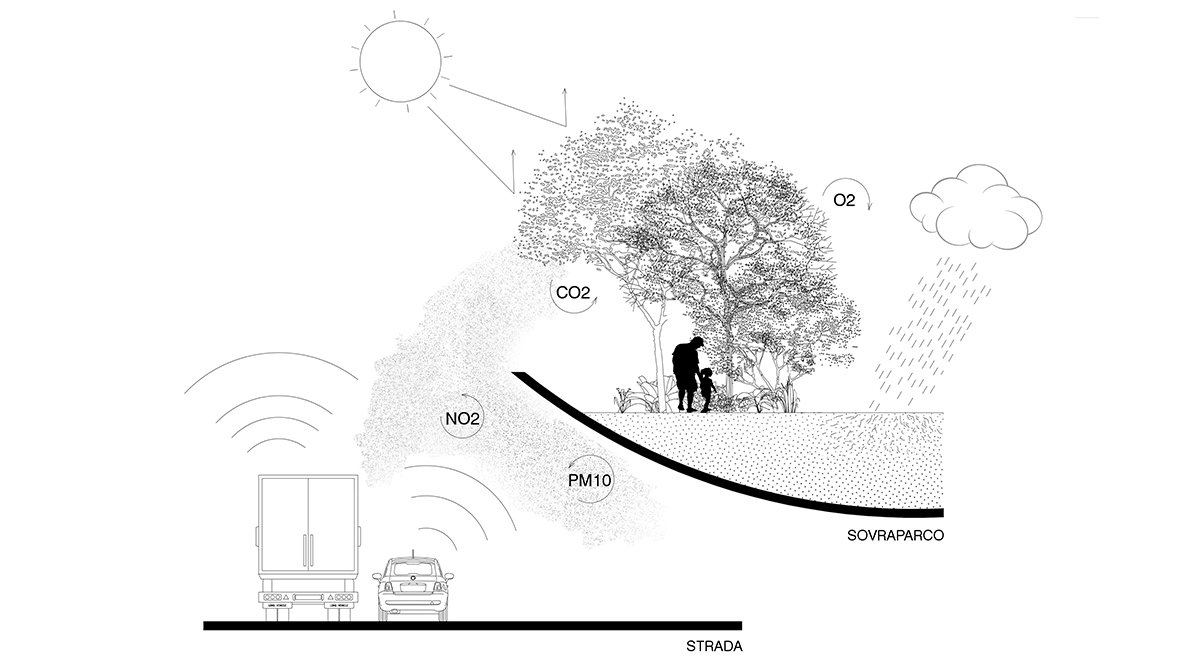 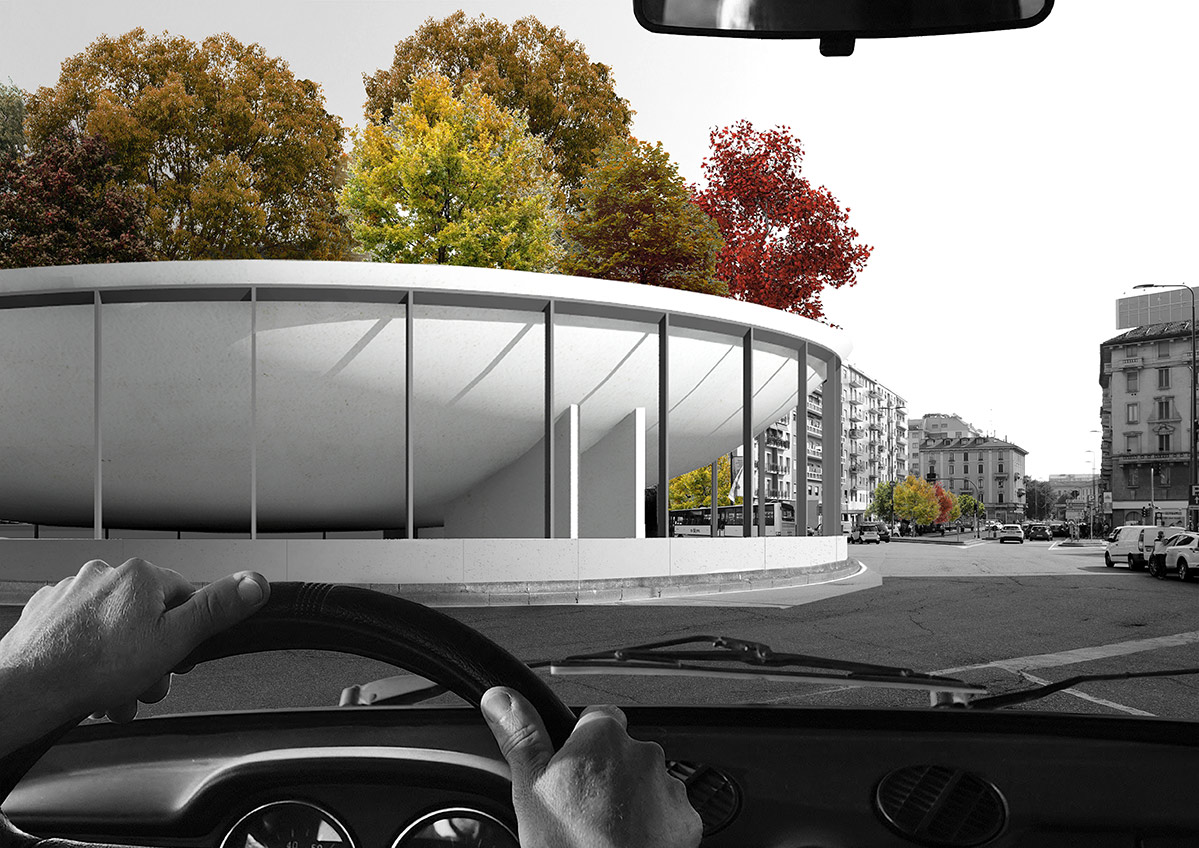 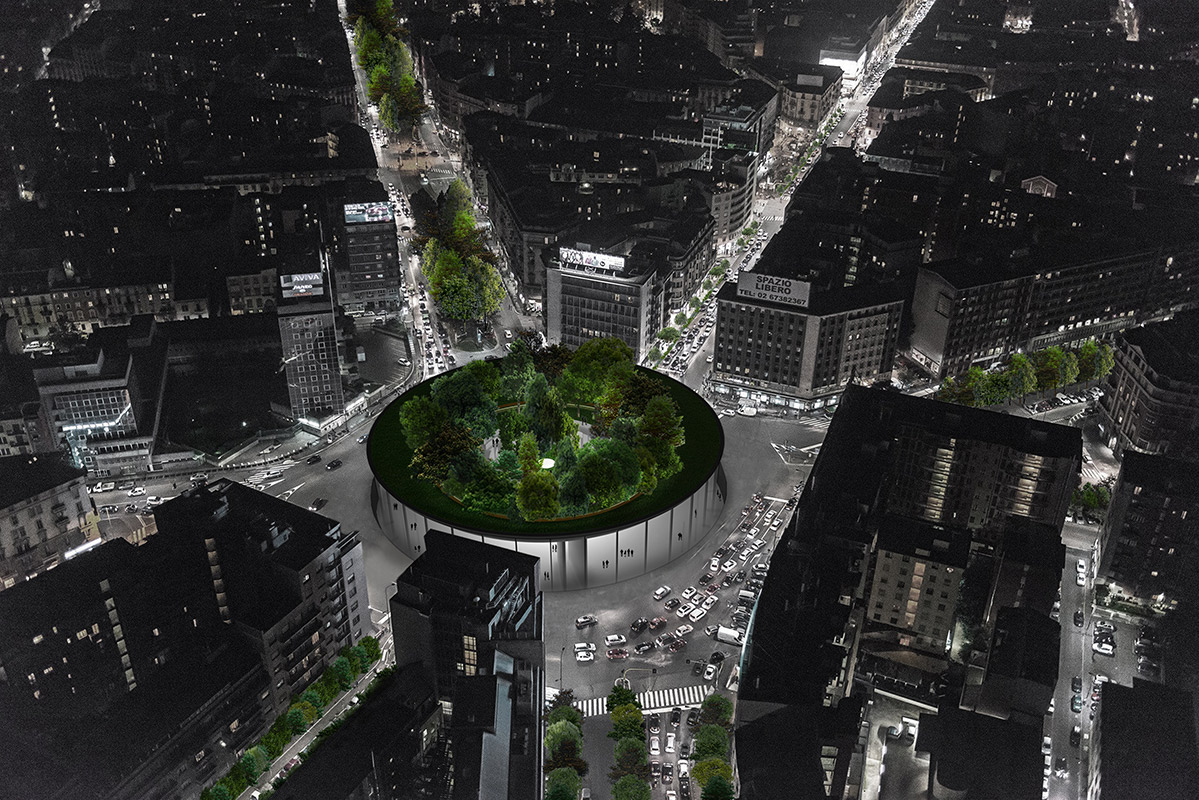 The ” Overpark ” neologism identifies a green area built from scratch above a pre-existing urban function.
In the context of an urgent need for permeable soil and vegetation for our cities, it is faster to act by addition rather than by substitution.
In a city that inside its buildings create mezzanines as soon as possible, creating hanging public gardens is our urban regeneration strategy.
We applied the architectural concept of the Overpark in the context of Piazzale Loreto.
Piazzale Loreto is the gateway of Milan, some of the most fast-moving parts of the city gravitate around it.
Piazzale Loreto is a rather ugly place: nothing more than a roundabout surrounded by buildings without architectural value.
Unable to impose on the owners aesthetic upgrades of facades or renovations of the entire buildings, the project radically rethinks the central space to drive the conversion of what belongs to the private sector.

Premise
Expressing an opinion about the city – about the transformation of the city – through an architectural project, can be considered a questionable operation, because urban planning should instead be the proper tool. Nevertheless, the clear distinction between these two tools can be discussed and can appear dated, in some cases,  in comparison to the problematics of a modern city, which today is the result of continuous planning.
Therefore, if the planning sets  what “needs to be done” and defines the rules to do it, in our case an architectural project, ignoring those rules, unveils  what needs to be done and how to do it at the same time.
Therefore, the outcome of our reflection is a project which has been elaborated without a client assignment, without a call for tenders and without anyone having asked for it. This idea reflects our heartfelt  need to regain od  the possibility of making the public space better; it reflects the duty we feel, as architects, to design urban transformations and to place the architectural project back at the center of the debate on the future of Italian cities.
The project deals with the renovation of Piazzale Loreto in Milan, through what we will call “Sovraparco”,  a suspended green area built from scratch above a pre-existing urban function.


The roundabout
Piazzale Loreto is now a shapeless space: the project is laid over the ancient rondò  shape, yet visible on a map in 1865, and rethinks the circulation as big roundabout. The placing of a circle, in its formal perfection, restores a powerfully defined space in the place of the present shapeless void. That footprint is nothing more than the original shape of the square, as it was in 1865.
The roundabout was then demolished: the known facts of the Second World War during 1944-45 assigned a violent mark to Piazzale Loreto, which was destined to become estranged by the city. A process of damnatio memoriae  reached its apex in the demolitiot of the Hotel Titanus, a splendid  Art Decò example, which was substituted with a huge concrete, curtain wall, building, whose planimetrical setting  doens’nt create any dialog with street allignments.
After the great excavations of the underground,  at  the beginning of the 1960’s, Piazzale Loreto finally became nothing more than a road junction, with shapeless islands, planted with a bamboo forest.
In the project, the power of the circumference imposes itself into the void space.
As in the famous examples of huge street roundabouts, above all the Champs-Élysées Étoile, the vehicular traffic is channeled in a pure form, creating a certain aestetic.

The Underground Plaza
Under the street level, there is an important  junction of the Milan underground, though it never has acquired the rank of a station. Enormous flows of people pass through it every day, restricted inside narrow tunnels. Uncovering the mezzanine level we obtain a wide and airy plaza, capable of connecting parts of the city which today are closed off.
Beyond the metropolitan access, the plaza is equipped with stores, coffee shops and restrooms.
The center of the plaza is deliberatedly rather empty: it is free and available to be used by citizens.

The Suspended Garden
As we said, the neologism “Sovrapaco” (Elevated Garden) indicates a green area built from scratch upon  a pre-existing urban function.
In the urgent context of need of permeable land and vegetation for our cities, it is quicker to add, rather than to substitute.
Like a planet hosting a natural oasis, the garden is floating over the plaza; as it is a reversed shell, nothing is visible from the inside, but the sky.
The borders protect people from pollution and traffic noise, generating a relative isolation inside, which has had success in many elevated parks in the World, from the Promenade Plantèe in Paris, France, to the High Line in New York City.
The access to the shell in possible through stairs and an elevator. Once inside the shell, the garden is organized on two flat levels.  The first level hosts stairs and elevator, as well as some services and covered spaces. In its center there is a large oculus, opened downwards to the plaza underneath, which in a certain way reverses the spatial logic of the Pantheon in Rome; a ramps system leads to the second level of the garden.
In the Sovraparco’s garden it is possible to relax, to read or even to organise small parties, but the formal circular power, never minimize its monumental image.
Like the Filarete Tower establishes its spatial relationships both with the Castello Sforzesco, and with th road that leads to the Duomo, our project aims to valorize Corso Buenos Aires as perspective focus of high symbolic value. The background of the most important commercial street in Milan does not have to be an abandoned building, but a luxuriant park, an urban forest, which hosts plants, animals and human beings.
In synthesis, the park and the plaza are “public” spaces, but they also have the characteristic of being “free” spaces due to their access and their use. This connotation brings us closer in some way to what Yvonne Farrell and Shelley McNamara have called “freespace”,  researched in their Biennale d’Architettura exposition in 2018.
The authors write:
“FREESPACE describes a generosity of spirit and a sense of humanity at the core of architecture’s agenda, focusing on the quality of space itself.
FREESPACE focuses on architecture’s ability to provide free and additional spatial gifts to those who use it and on its ability to address the unspoken wishes of strangers.
FREESPACE celebrates architecture’s capacity to find additional and unexpected generosity in each project – even within the most private, defensive, exclusive or commercially restricted conditions.
FREESPACE provides the opportunity to emphasise nature’s free gifts of light – sunlight and moonlight, air, gravity, materials –  natural and man-made resources.
FREESPACE encourages reviewing ways of thinking, new ways of seeing the world, of inventing solutions where architecture provides for the well being and dignity of  each citizen of this fragile planet.”